Multiple clinical risk prediction tools for hospital acquired venous thromboembolism (HA-VTE) have been developed. The objectives of this study were to develop and assess the feasibility of data extraction from Electronic Medical Records (EMR) from an enterprise database warehouse (EDW) and to test the validity of a previously developed Pediatric Clot Decision Rule (PCDR). This single-center prospective observational cohort study was conducted between March 2016 and March 2017 and included eligible patients admitted to the intensive care units. Risk score was calculated using the PCDR tool. Sensitivity, specificity, positive and negative predicted value (PPV and NPV) were calculated based on a cut‐point of 3. A total of 2822 children were eligible for analysis and 5.1% (95% CI 4.2–6.2) children had a PCDR score of 3. Children with PCDR score of ≥ 3 had a 3 times higher odd of developing VTE compared to those with scores < 3 (OR 3.1; 95% CI 1.93–4.80; p < 0.001). The model performance showed that at the cutoff point of ≥ 3, both the specificity and sensitivity of the PCDR in predicting VTE was 69% and NPV of 98%. We successfully demonstrated using our EDW to populate a research database using an automatic data import. A PCDR score of ≥ 3 was associated with VTE. Collaboration through large registries will be useful in informing practices and guidelines for rare disorders such as pediatric VTE. 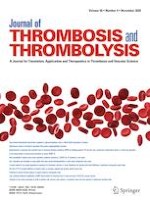 Efficacy and safety of low dose rivaroxaban in patients with coronary heart disease: a systematic review and meta-analysis