Patients with chronic myeloid leukemia (CML) treated with tyrosine kinase inhibitors (TKIs) have near-normal life expectancies. With this comes the possibility of developing second cancers; we aimed to evaluate the incidence of second malignancies in patients with CML using Surveillance, Epidemiology, and End Results Program data. We identified 13,276 patients with CML newly diagnosed in 2001–2014. Patients who had prior history of cancer, a concurrent diagnosis of other malignancies in the same diagnostic year, or a second leukemia after CML diagnosis were excluded. Second malignancies were observed in 597 patients (4%) with a median follow-up of 69 months. The 5- and 10-year cumulative incidences of death for all patients were 30.5% and 41.8%. The 5- and 10-year cumulative incidences of second malignancies were 4.4% and 7.2%, respectively. The overall standardized incidence ratio (SIR) was 1.204. Increased SIRs compared to the general population were observed for the male genital system, 1.593; digestive system, 1.291; skin, 1.588; and urinary system, 1.366. Overall excess absolute risk was 1.714 per 1000 person-years at risk. Our results suggest that relative incidence of overall second malignancies in CML is slightly higher than that of the general population, with minimal increase in the excess absolute risk. 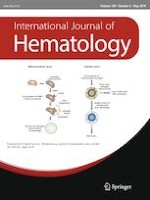 Correction to: Factors predicting the recurrence of Epstein–Barr virus-associated hemophagocytic lymphohistiocytosis in children after treatment using the HLH-2004 protocol

Impact of CD123 expression, analyzed by immunohistochemistry, on clinical outcomes in patients with acute myeloid leukemia