Asthma is a disease of the lung, and from previous studies, a decrement in lung function was observed in patients with diabetes. These results motivated us to study the prevalence of asthma among diabetics. In this study, we estimated the prevalence of asthma among men and women, and also investigated the risk factors for asthma in diabetic and non-diabetic groups in India. This analysis was based on the National Family Health Survey-3 (NFHS-3) data on 71,776 men aged 15–54 years and 115,642 non-pregnant women aged 15–49 years. X 2 test was used to check the dependency of asthma with different socioeconomic, diet-, and lifestyle-related factors. Logistic regression analysis was used to identify the risk factors for asthma. There is significant (p < 0.001) association between diabetes and asthma. Individuals with diabetes are at a higher risk of asthma as compared to those without diabetes. The results of the study revealed that among diabetic women and men, 14.1 and 12.8 % were asthmatic, respectively. In without diabetes group, the prevalence of asthma in men and women was 1.7 and 1.6 %, respectively. Men with diabetes were 8.691 times (95 % CI: 7.154–10.558) and women with diabetes were 10.106 times (95 % CI: 8.455–12.08) more likely to have asthma than those without diabetes. Occasional/never consumption of fish, use of unclean fuel, lower age level, and not living with a partner were significantly (p < 0.05) associated with the higher risk of asthma among diabetics. 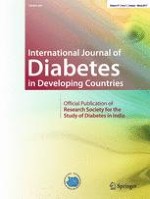 The seasonality variation plays an important role for increasing the uncontrolled type 2 diabetes?