Post-burn breast deformities are not an uncommon condition after severe second-degree or third-degree burn and present as severe asymmetry of the breast as compared to the opposite side, displacement of nipple-areola complex, obliteration of inframammary fold, and reduced breast projection. Based on deformities especially for lower pole breast contracture, we propose a new classification to describe breast contracture. There is no tailor-made approach described to deal such deformities. Various options are available ranging from skin graft to different flaps. We present reconstruction by TDAP flap after the release of breast contracture grades I and II. This study aimed to classify the lower pole breast contracture according to its severity and to evaluate the outcome of TDAP flap reconstruction and augmentation of the lower pole of the breast in terms of symmetry and aesthesis.

This is a descriptive retrospective study of 10 patients with 15 post-burn contracted breast affecting the inferior pole of the breast and inframammary fold within a period of January 2012 to March 2016 in Kasralainy hospital, Cairo. All cases were evaluated according to flap vascularity, donor site morbidity, symmetry, and esthetic outcome.

All flaps survived completely. Flap dimension ranged from 18 × 10 to 22 × 12 cm. The muscle sparing design had been used in three patients due to lack of reliable perforators. Patients were evaluated for their satisfaction, and all of them were satisfied.

It is essential to classify the grade of post-burn lower pole breast contracture according to the proposed classification. TDAP is a valuable option in case of grade I and II deformities only. For severe grade III breast contracture, more volume restoring procedure is advisable.
Level of Evidence: Level IV, therapeutic study. 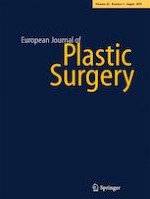 Correction to: Current trends in operative treatment of carpometacarpal osteoarthritis: a survey of European hand surgeons