The purpose of this study was to investigate the thermal injuries caused by ultrasonic pars plana phacoemulsification and aspiration (PPPEA) using pig eyes.

Thermography measurements revealed a slight temperature rise around the scleral wound in the open-tip case, yet a marked temperature rise in the closed-tip case. The scleral wound incision produced by the open tip was linear, while that produced by the closed tip was expanded. Histological examination revealed mild degeneration of the sclera around the wound in the open-tip case, yet marked tissue degeneration by thermal injuries in the closed-tip case.

Our findings showed that in PPPEA, the temperature of the tip of a 20G vitrectomy system rapidly increases due to the closed-tip technique, thus producing obvious thermal damage to the scleral wound. In order to prevent thermal injuries to the scleral wound during PPPEA, it is important to shorten the time of ultrasonic oscillation during surgery as much as possible while the tip is occluded with nuclear fragments. 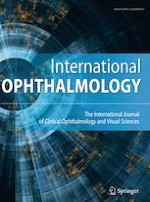 The effect of combined phacotrabeculectomy, trabeculectomy and phacoemulsification on the corneal endothelium in the early stage: a preliminary study

To remove or not to remove (the AC-IOL)? This is the question

Comparison of two popular nuclear disassembly techniques for cataract surgeons in training: divide and conquer versus stop and chop