Our first objective was to estimate empirically-derived subgroups (latent profiles) of observed carbohydrate, protein, and fat intake density in a nationally representative sample of older U.S. adults. Our second objective was to determine whether membership in these groups was associated with levels of, and short term change in, physical mobility limitations.

Measures of macronutrient density were taken from the 2013 Health Care and Nutrition Study, an off-year supplement to the Health and Retirement Study, which provided indicators of physical mobility limitations and sociodemographic and health-related covariates.

Percent of daily calories from carbohydrate, protein, and fat were calculated based on responses to a modified Harvard food frequency questionnaire. Latent profile analysis was used to describe unobserved heterogeneity in measures of carbohydrate, protein, and fat density. Mobility limitation counts were based on responses to 11 items indicating physical limitations. Poisson regression models with autoregressive controls were used to identify associations between macronutrient density profile membership and mobility limitations. Sociodemographic and health-related covariates were included in all Poisson regression models.

Four latent subgroups of macronutrient density were identified: “High Carbohydrate”, “Moderate with Fat”, “Moderate”, and “Low Carbohydrate/High Fat”. Older adults with the lowest percentage of daily calories coming from carbohydrate and the greatest percentage coming from fat (“Low Carbohydrate/High Fat”) were found to have greater reported mobility limitations in 2014 than those identified as having moderate macronutrient density, and more rapid two-year increases in mobility limitations than those identified as “Moderate with Fat” or “Moderate”.

Older adults identified as having the lowest carbohydrate and highest fat energy density were more likely to report a greater number of mobility limitations and experience greater increases in these limitations than those identified as having moderate macronutrient density. These results suggest that the interrelation of macronutrients must be considered by those seeking to reduce functional limitations among older adults through dietary interventions. 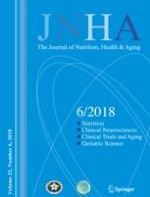 Links Between Atherosclerosis and Osteoporosis in Middle Aged and Elderly Men

Potato Consumption is Not Associated With Higher Risk of Mortality: A Longitudinal Study Among Southern Italian Older Adults