We used magnetoencephalography to examine lateralization and binaural interaction of the middle-latency and late-brainstem components of the auditory evoked response (the MLR and SN10, respectively). Click stimuli were presented either monaurally, or binaurally with left- or right-leading interaural time differences (ITDs). While early MLR components, including the N19 and P30, were larger for monaural stimuli presented contralaterally (by approximately 30 and 36 % in the left and right hemispheres, respectively), later components, including the N40 and P50, were larger ipsilaterally. In contrast, MLRs elicited by binaural clicks with left- or right-leading ITDs did not differ. Depending on filter settings, weak binaural interaction could be observed as early as the P13 but was clearly much larger for later components, beginning at the P30, indicating some degree of binaural linearity up to early stages of cortical processing. The SN10, an obscure late-brainstem component, was observed consistently in individuals and showed linear binaural additivity. The results indicate that while the MLR is lateralized in response to monaural stimuli—and not ITDs—this lateralization reverses from primarily contralateral to primarily ipsilateral as early as 40 ms post stimulus and is never as large as that seen with fMRI. 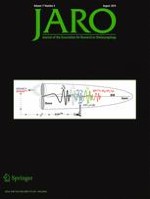 Two Ears Are Not Always Better than One: Mandatory Vowel Fusion Across Spectrally Mismatched Ears in Hearing-Impaired Listeners

Induced Loudness Reduction and Enhancement in Acoustic and Electric Hearing

Sensitivity to Interaural Time Differences Conveyed in the Stimulus Envelope: Estimating Inputs of Binaural Neurons Through the Temporal Analysis of Spike Trains