The purpose of this study was to evaluate the effect of allogenic leukocyte-reduced platelet-rich plasma on human tenocytes after treatment with prednisolone and to develop a standardization of its application for clinical practice.

A leukocyte-reduced PRP was produced using the Arthrex Double Syringe (Arthrex, Inc., Naples, FL, USA), in a modified single-spin separation method. Human tenocytes were isolated from discarded rotator cuff segments. Tenocytes were cultured in the presence of PRP and prednisolone, both alone and in combination. Control samples were treated in media containing 2% FCS for 72 h. After 72 h of incubation, cell cycle kinetics of tenocytes were analyzed to assess proliferation. 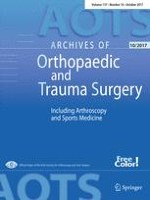 Exposure of medical staff to radiation during osteosynthesis of proximal femoral fracture: descriptive analysis and comparison of different devices

Coronal tibiofemoral subluxation is not an independent risk factor for total knee arthroplasty in patients with moderate to severe varus-osteoarthritis: data from the “Osteoarthritis Initiative”

Comparison of lateral and skyline fluoroscopic views for detection of prominent screws in distal radius fractures plating: results of an ultrasonographic study