The online version of this article (https://​doi.​org/​10.​1007/​s00262-019-02385-x) contains supplementary material, which is available to authorized users.
Some of the results included in this paper were previously presented in poster format at the Society of Gynecologic Oncology (SGO) National Meeting (Honolulu Hawaii USA, March 2019) and as an oral presentation at the Gynecologic Oncology National Fellow’s Forum (Miami Florida USA, May 2019) [1].

High pre-treatment LCK mRNA expression was found to be a strong predictor of survival in a set of 535 ovarian cancers. Patients with high LCK mRNA expression had a longer median progression free survival (PFS) of 29.4 months compared to 16.9 months in those without LCK high expression (p = 0.003), and longer median overall survival (OS) of 95.1 months versus 44.5 months (p = 0.001), which was confirmed in an independent cohort by IHC (p = 0.04). LCK expression was compared to CYT across tumor types available in the TCGA and was a significant predictor of prognosis in HGSOC where CYT was not predictive. Unexpectedly, LCK high samples also were enriched in numerous immunoglobulin-related and other B cell transcripts.

LCK is a better prognostic factor than CYT in ovarian cancer. In HGSOC, LCK high samples were characterized by higher expression of immunoglobulin and B-cell related genes suggesting that a cooperative interaction between tumor infiltrating T and B cells may correlate with better survival in this disease. 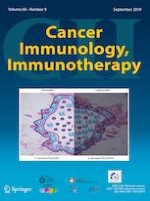 Safety and efficacy of PD-1 blockade-activated multiple antigen-specific cellular therapy alone or in combination with apatinib in patients with advanced solid tumors: a pooled analysis of two prospective trials