Hemorrhagic transformation (HT) is a common complication of acute ischemic stroke (AIS), and inflammation has been found to play an important role in the occurrence of HT. We aimed to investigate the impact of lymphocyte-to-monocyte ratio (LMR), a maker of inflammatory status, on HT in patients with AIS.

Consecutive AIS patients within 7 days from stroke onset were enrolled between January 2016 and October 2017. LMR was calculated according to lymphocyte and monocyte counts obtained within 24 h on admission. Patients were categorized into three groups according to LMR tertiles. HT was detected by follow-up computed tomography (CT) or magnetic resonance imaging (MRI) during hospitalization. The multivariate logistic analysis was used to evaluate the independent relationship between LMR and HT.

Lower LMR was independently related to higher risk of HT in patients with AIS. Admission LMR may be used as one of the predictors for HT. Further prospective multicenter studies are needed to validate our findings. 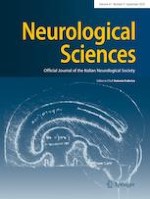 Functional movement disorders in a patient with COVID-19

STK11 mutation status is associated with decreased survival in meningiomas