Mild islet inflammation has been suggested as a contributing factor to beta cell failure in type 2 diabetes. Macrophage levels are elevated in the islets of humans and mice with type 2 diabetes, but their effects on beta cells are not understood. Our goal was to examine the gene expression changes in islet-associated macrophages in obesity models with opposing disposition to diabetes development and to assess their potential contribution to beta cell (mal)adaptation.

The findings of this study suggest that distinct alterations in islet macrophages of obese mice are critically important for the disruption of beta cell gene expression in diabetes. 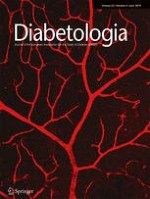 Apolipoprotein C-III and its defined lipoprotein subspecies in relation to incident diabetes: the Multi-Ethnic Study of Atherosclerosis

NAD+ metabolism as a target for metabolic health: have we found the silver bullet?

Pre-diagnostic plasma enterolactone concentrations are associated with lower mortality among individuals with type 2 diabetes: a case-cohort study in the Danish Diet, Cancer and Health cohort

Elevated brain glutamate levels in type 1 diabetes: correlations with glycaemic control and age of disease onset but not with hypoglycaemia awareness status

Efficacy and safety of evolocumab in individuals with type 2 diabetes mellitus: primary results of the randomised controlled BANTING study