Common variable immunodeficiency (CVID) is characterized by hypogammaglobulinemia and clinical manifestations such as infections, autoimmunity, and malignancy. We sought to determine if responsiveness to interleukin-21 (IL-21), a key cytokine for B cell differentiation, correlates with distinct clinical phenotypes in CVID.

CVID subjects exhibited decreased CD27+ B cells and IgG production after 7 days of stimulation with anti-CD40+IL-21 (p < 0.05). In a subset of subjects [CVID responders (R)], the addition of IL-4 led to significant increases in CD27+ B cells and IgG (p < 0.05). In CVID non-responders (NR), CD27+ B cells and IgG remained lower despite the addition of IL-4. CVID NR experienced significantly more non-infectious clinical complications of CVID than R [OR 8.8, 95% confidence interval (CI) 1.6 to 48.13]. Previous studies reported that CVID subjects with ≤ 2% class-switched memory B cells were more at risk of these complications, but no significant association was found among this cohort of subjects [OR 3.5, CI 0.9 to 13.3]. In fact, 34.6% of CVID NR had > 2% class-switched memory B cells at baseline.

The IL-4 and IL-21 in vitro assays distinguish two groups of CVID subjects and can be used with baseline B cell subpopulation phenotyping to better identify patients experiencing more vs. fewer clinical non-infectious complications and potentially to modulate therapy. 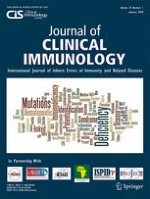 Mechanisms of Sustained Neutrophilia in Patient WHIM-09, Cured of WHIM Syndrome by Chromothripsis

Chronic Diarrhea in Common Variable Immunodeficiency: a Case Series and Review of the Literature

Nitazoxanide May Modify the Course of Progressive Multifocal Leukoencephalopathy