The aim of this study was to determine the prevalence of Echinococcus multilocularis environmental contamination in an urban fringe—the Nopporo forest park of Sapporo city, Hokkaido, Japan. A secondary aim was to determine possible transmission risks areas by associating percentage occurrence of E. multilocularis-positive faeces with the different land-use classes.

Our findings showed high prevalence rates in both E. multilocularis egg and coproantigen-positive faeces (16 and 49%, respectively) in the investigated urban fringe forest park. Data revealed that percentage occurrence of E. multilocularis-positive fox faeces was associated with land-use classes, such as forest and open field (P < 0.05).

We conclude that Nopporo forest park in the urban fringe of Sapporo city, Hokkaido is a reservoir with a high prevalence of zoonotic infective agents for alveolar echinococcosis. Our findings suggest that interface habitats between forests or woodlands and open fields are indispensable for continued maintenance of the life-cycle of E. multilocularis and, as such, constitute high risk areas for echinococcosis transmission. 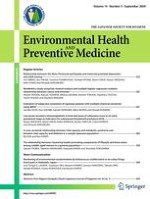