A prospective multi-institutional phase II study was conducted to evaluate the feasibility and efficacy of preoperative chemotherapy for resectable CRLM (ClinicalTrials.gov identifier number NCT00594529). Patients were scheduled to receive 6 cycles of mFOLFOX6 therapy before liver surgery. The primary endpoint was the macroscopic curative resection rate.

A total of 30 patients were included in this study. Two patients who were diagnosed with hepatocellular and intrahepatic cholangiocellular carcinoma based on pathology were excluded from the analysis. More than half of the patients (57 %) had solitary liver metastasis. The completion rate of preoperative chemotherapy was 64.3 % and the response rate was 53.6 %. Two patients were unable to proceed to liver resections due to disease progression and severe postoperative complications following primary tumor resection. Macroscopic curative resection was obtained in 89.3 % of eligible patients. Postoperative mortality and severe complication (≥Gr. 3) rates were 0 and 11 %, respectively. The 3-year overall and progression-free survival rates were 81.9 and 47.4 %, respectively.

Our phase II study demonstrated the feasibility of liver resection combined with preoperative mFOLFOX6 therapy in patients with initially resectable CRLM. Further study is warranted to address the oncological effects of preoperative chemotherapy. 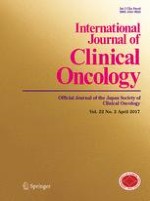 Breakthrough chemotherapy-induced nausea and vomiting: report of a nationwide survey by the CINV Study Group of Japan