A decrease in absolute numbers (abs.) of circulating dendritic cells (DCs) and recruitment into target organs has been reported, but whether the level of proteinuria associates with circulating DC abs. has not been clarified.

We conducted a cross-sectional study of 210 patients with kidney disease aged 21–96 years who were admitted to our hospital for kidney biopsy in 2007–2010. For accuracy, the level of proteinuria was thoroughly measured by 24-h urine collection from patients in their admitted condition. The abs. of total DCs (tDCs), myeloid DCs (mDCs) and plasmacytoid DCs (pDCs) was measured by three-color fluorescence-activated cell sorting (FACS). Patients were divided into four groups based upon the quartile of each DC abs. and one-way ANOVA, and multivariable-adjusted regression analyses were performed.

We first reported that circulating mDC abs. has a negative association with the level of proteinuria. 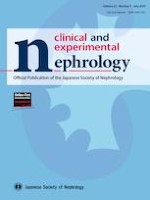 Focus on POCUS: it is time for the kidney doctors to upgrade their physical examination