The zebrafish is an established animal model commonly used in biological, neuroscience, and genetic research. We have developed a new light stimulating system using white light-emitting diodes (LEDs) to elicit ERGs from zebrafish larvae. The purpose of this study was to record full-field ERGs and to evaluate the inter-trial reliability of the ERGs recorded with our system from zebrafish larvae.

The stimulating device used white LEDs that were attached to a stereomicroscope, and the location of the recording electrode on the cornea could be monitored while the eye was being stimulated. Full-field scotopic and photopic ERGs were recorded from larvae at the age of 5–7 days post-fertilization (dpf). Intensity–response curves were constructed from the ERGs. Inter-trial reliability of the ERGs recorded by our system was evaluated.

This stimulating system could be used for efficient and reliable ERG recordings from 5–7 dpf larvae. The amplitudes, implicit times, and the waveforms of the scotopic and photopic ERGs were similar to those reported in earlier studies. Inter-trial reliability of the amplitudes of the photopic ERG b-waves was excellent with an intra-class correlation coefficient of 0.98.

We conclude that this new light stimulation system using white LEDs attached to a stereomicroscope will be helpful in recording reliable ERGs from zebrafish larvae. 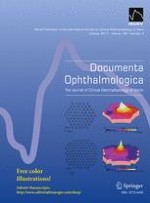 The DTL ERG electrode comes in different shapes and sizes: Are they all good?