Recent studies have proposed that obesity may be associated with a higher risk of small intestine bacterial overgrowth (SIBO) although the results were inconsistent. The microbiome has a known metabolic role; its impact on obesity in animal models generated the hypothesis of an association between a dysfunctional microbiome and obesity. We performed this systematic review and meta-analysis to elucidate this possible association by summarizing all available data.

A literature search utilizing MEDLINE and EMBASE databases from inception until August 2019 was conducted. Eligible studies included either cohort studies or cross-sectional studies that consisted of two groups of participants, those with obesity and those without obesity, and compared the prevalence of SIBO between the groups. Adjusted odds ratios (OR) from each study were consolidated by the generic inverse variance method of DerSimonian and Laird.

A total of five studies with 515 patients fulfilled eligibility criteria and were included in this meta-analysis. The risk of SIBO among individuals with obesity was higher than in individuals without obesity but did not reach statistical significance with a pooled OR of 2.08 [95% confidence interval (CI) 0.82–5.31; p = 0.12; I2 84%]. Sensitivity analysis including only studies from Western countries increased the pooled OR to 3.41 and reached statistical significance (95% CI 1.21–9.59; p = 0.02; I2 62%).

This meta-analysis found that the risk of SIBO was about two times higher among individuals with obesity compared to individuals without obesity, although the result did not reach statistical significance. The risk increased to threefold and reached statistical significance when only studies from Western countries were included. These observations may suggest the role of obesity as a predisposing factor for SIBO although more studies are still needed to corroborate these preliminary results. 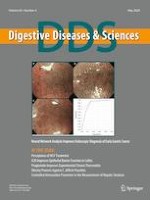 Risk Factors, Management, and Outcomes of Pyogenic Liver Abscess in a US Safety Net Hospital

Cholangioscopy Biopsies Improve Detection of Cholangiocarcinoma When Combined with Cytology and FISH, but Not in Patients with PSC