The aim of this study was to determine the significance of lymphadenectomy for recurrence after treatment for esophageal squamous cell carcinoma. 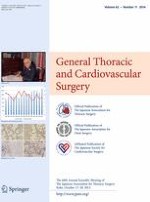