Accurate assessment of viability of hepatocellular carcinoma (HCC) after transcatheter arterial chemoembolization (TACE) is important for therapy planning. The purpose of this study is to determine the diagnostic value of a novel image analysis method called parametric response mapping (PRM) in predicting viability of tumor in HCC treated with TACE for dynamic CT images.

35 patients who had 35 iodized-oil defect areas (IODAs) in HCCs treated with TACE were included in our study. These patients were divided into two groups, one group with viable tumors (n = 22) and the other group with non-viable tumors (n = 13) in the IODA. All patients were followed up using triple-phase dynamic CT after the treatment. We compared (a) manual analysis, (b) using PRM results, and (c) using PRM results with automatic classifier to distinguish between two tumor groups based on dynamic CT images from two longitudinal exams. Two radiologists performed the manual analysis. The PRM approach was implemented using prototype software. We adopted an off-the-shelf k nearest neighbor (kNN) classifier and leave-one-out cross-validation for the third approach. The area under the curve (AUC) values were compared for three approaches.

We improved upon the standard manual analysis approach by adopting a novel image analysis method of PRM combined with an automatic classifier. 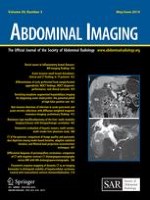