Thin basement membrane nephropathy (TBMN) is diagnosed by diffuse thinning of the glomerular basement membrane (GBM) without any clinical and pathologic findings of Alport syndrome and the other renal diseases. TBMN is characterized clinically by benign familial hematuria but rarely develops into end-stage renal disease.

All patients had hematuria, and 21 patients (77.8%) had proteinuria. In six patients (28.6%) who were more than 50 years of age, the estimated glomerular filtration rate (eGFR) decreased from G3a to G4 in the chronic kidney disease stage. Pathologically, an irregular decrease in intensity of type IV collagen α5(IV) chain was seen in GBM, and irregular thinning with diffuse rough etched images was observed on the GBM surface with several sizes of holes by low-vacuum scanning electron microscopy. The glomerular morphology of TBMN was characterized by an increased number of small glomerular capillaries with an increased extracellular matrix (ECM). These characteristic morphologic alterations were evident from a young age in patients with TBMN, but were not correlated directly with the decrease of eGFR, the degree of hematuria, and proteinuria. The decrease of eGFR in patients with TBMN who were more than 50 years of age might be primarily mediated by arteriolosclerosis-associated glomerulosclerosis and interstitial fibrosis.

Characteristic pathological glomerular findings and GBM alterations occurred from a young age but were not associated directly with renal impairment in biopsy-proven TBMN. 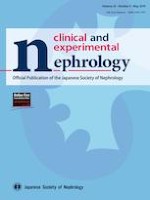 Evaluation of the safety, effectiveness, and health-related QOL impact of early rehabilitation in patients with nephrotic syndrome

Correction to: Clinical epidemiology of infectious disease among patients with chronic kidney disease