Initiation of non-medical prescription opioid use (NMPO) during early adolescence is tightly linked to heroin and other drug use disorders and related sequelae in later adolescence and young adulthood. Few studies explore stakeholders’ perspectives on the burden and determinants of youth opioid use and barriers and facilitators to engaging youth in opioid use prevention and treatment services in urban settings with longstanding opioid epidemics. In-depth interviews were conducted with 22 stakeholders representing health and social service agencies in Baltimore, Maryland from May 2018- February 2019, to examine their perspectives on the burden and context of adolescent opioid use and identify barriers and facilitators to preventing and responding to adolescent opioid use. Transcripts were analyzed using the constant comparison method to identify themes. Most respondents described a recent uptick in opioid use independently, and in combination with other substances. As compared to heroin, NMPO was perceived to be more frequently used and less stigmatized among youth. Stakeholders perceived the process of transitioning from using NMPO to heroin as more common among White vs. Black youth and was perceived as occurring faster among White vs. Black youth. Some stakeholders believed racial differences in internal stigma against heroin use, and differential health service use among Black youth and White youth may have influenced these differences. Trauma and poverty were noted determinants of youth opioid use. Barriers to service provision included youth cognitive development, stigma and structural factors (e.g., disinvestment, lack of youth-centered and integrated services). Stakeholders perceive prevalent NMPO among Baltimore youth and identify multilevel barriers to delivering prevention, treatment and harm reduction services to this population. These findings encourage further investigation of determinants and consequences of opioid use among diverse racial/ethnic groups of youth in urban settings, and development of multilevel, youth-driven and youth-centered approaches to prevention and treatment. 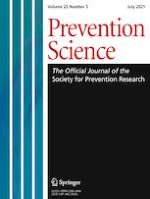 Keepin’ It REAL—Mantente REAL in Mexico: a Cluster Randomized Controlled Trial of a Culturally Adapted Substance Use Prevention Curriculum for Early Adolescents

“Dying is Not a Fear”: Teen and Parent Perspectives on Messaging to Prevent Crystal Meth Use Among Teens in Rural North Idaho

Social Validity of the Strengthening Families Program in Northeastern Brazil: the Voices of Parents, Adolescents, and Facilitators