Treatment of a perianal fistula is difficult due to the risk of fecal incontinence and recurrence. The ligation of intersphincteric tract (LIFT) procedure is a sphincter-saving procedure associated with success rates ranging from 57 to 94%. The aim of our study was to find predictors for a favorable outcome of the LIFT procedure, evaluation of postoperative fecal incontinence, quality of life, and subsequent treatment with long-term follow-up.

This study was performed in patients who underwent LIFT between 2013 and 2015 at our institution. Their medical data were retrieved from the electronic patient files. The fistula characteristics were described by physical examination, three-dimensional endoanal ultrasound, and perioperative evaluation. Recurrence rate, postoperative fecal incontinence, and quality of life were assessed with the Patient-Reported Outcome Measurement (PROM). Thirty-two months later, long-term follow-up including subsequent procedures was evaluated.

Forty-five patients [17 men, mean age 40 years (range 24–67 years)] were included. In 41 (84%) patients, the fistula was classified as complex; 32 (71%) were referrals with a history of previous fistula surgery. The initial success rate was 18 (40%). Only the height of the internal fistula opening (≥ 15 mm p < 0.03) was associated with recurrence. The LIFT procedure did not affect the occurrence of fecal incontinence or soiling. Recurrence showed a trend with a lower PROM (p = 0.07). Twenty-four months later, further surgery leads to cure in 34 (75%), asymptomatic fistulas in 7 (16%), and persisting active fistulas in 4 (9%) patients.

Initial LIFT had a success rate of 40% and with subsequent surgical treatment 75%. Recurrence after LIFT is related to the height of the internal fistula opening and is associated with diminished quality of life. Continence was not affected by initial LIFT. 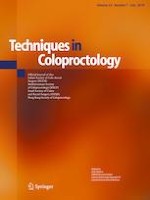 A standardized use of intraoperative anastomotic testing in colorectal surgery in the new millennium: is technology taking over? A systematic review and network meta-analysis