Biliary tract cancer (BTC) includes intrahepatic cholangiocarcinoma, extrahepatic cholangiocarcinoma, gallbladder cancer and ampullary cancer. Although the incidence rates of BTC are relatively low in the USA and some western European countries, the rates are high in Asia, Latin America and eastern European countries [ 1]. There were almost 18,000 deaths in Japan and 3,200 deaths in the USA from extra-hepatic bile duct cancer, ampullary cancer and gallbladder cancer [ 2, 3]. The prognosis of BTC patients is extremely poor, with five-year survival rates in the range of 5–15 % [ 4, 5]. Even though surgical resection is the only curative treatment, the reported overall survival rate following surgery is nevertheless only about 40 % [ 6]. To improve the prognosis of BTC requires the development of effective adjuvant or neoadjuvant treatment with multidisciplinary care.
To date, only two randomized control trials (RCTs) of adjuvant chemotherapy for BTC have been reported, but both included patients with BTC in limited locations. These studies showed no significant benefit from adjuvant chemotherapy. Takada et al. [ 7] reported the results of postoperative adjuvant chemotherapy in patients with pancreatic cancer and limited BTC, but an intention-to-treat analysis showed no significant difference in five-year survival. The ESPAC-3 trial was a multicenter RCT of adjuvant chemotherapy versus observation with periampullary adenocarcinoma. Although multivariable analysis with adjustment for prognostic variables demonstrated a statistically significant survival benefit associated with adjuvant chemotherapy, median survival time from the primary analysis in the chemotherapy group did not significantly differ from that in the observation group [ 8].
Anzeige
In another study, a meta-analysis found a non-significant improvement in overall survival with adjuvant therapy (chemotherapy, radiotherapy or chemoradiotherapy) compared with surgery alone for BTC, but patients with node-positive and R1 disease had a significant survival benefit [ 9]. The authors accordingly reported that adjuvant therapy is the standard of care for high-risk patients. However, this meta-analysis had limitations, included selection bias, stage migration and heterogeneous treatments and should not be considered conclusive, thereby warranting additional prospective studies [ 10]. Thus, an effective evidence-based adjuvant chemotherapy has yet to be identified, as reflected by guidelines of the National Comprehensive Cancer Network [ 11] and from guidelines in Japan [ 12] which strongly endorse the need for clinical trials of adjuvant chemotherapy for patients with resectable BTC.
At this point, however, a standard adjuvant chemotherapy for BTC has not been determined. It is necessary to develop more effective adjuvant chemotherapy to suppress recurrences after surgery. We speculated that combination therapy with gemcitabine plus cisplatin (GC) would be an effective and intensive adjuvant chemotherapy, because in patients with locally advanced or metastatic BTC, the ABC-02 trial showed a significant survival advantage for GC over gemcitabine alone [ 13], and similar results were observed in Japan [ 14]. Therefore, we conducted a phase I study to determine the maximum tolerated dose (MTD) and recommended dose (RD) of GC in patients with BTC undergoing curative resection without major hepatectomy.

Definition of DLTs, MTD and RD

Dose limiting toxicities (DLTs) were determined during the first 6 weeks. DLT was defined according to Common Toxicity Criteria Adverse Events v4.0 (CTCAE v4.0) as one or more of the following events: (1) grade 4 leucopenia, neutropenia or thrombocytopenia, (2) grade 3–4 neutropenia complicated by fever, (3) clinically significant grade 3–4 non-hematological toxicities, (4) need to withhold GC on day 8 consecutively in the first 6 weeks due to an adverse event or (5) delay in course of more than 14 days following an adverse event. If DLT was observed in one or two of three patients, three additional patients were enrolled at that level. If three or more of six patients or if all three initial patients experienced DLT at that level, the dose was de-escalated to the next lower level. MTD was defined as the lowest dose level that produced DLTs in three or more of six patients or in all three initial patients. RD was defined as one dose level lower than the MTD, considering the toxicity and tolerability observed in the entire study. If a DLT was observed in one or two of six patients in Level 1 (starting dose), Level 1 was initially defined as the RD. The protocol required the enrollment of additional patients to examine the safety of the RD according to the recommendation from the Data and Safety Monitoring Committee (DSMC). There was no dose escalation in individual patients.

Pretreatment evaluation included the patient’s medical history and physical examination, imaging tests using contrast-enhanced computed tomography or magnetic resonance imaging, blood tests, electrocardiogram and chest X-rays. Creatinine clearance was calculated using the Cockcroft-Gault formula. During treatment cycles, physical examination and blood tests were scheduled on each administration day of chemotherapy. Carcinoembryonic antigen and carbohydrate antigen 19-9 (CA19-9) were measured at the time patients were enrolled in the study and every month thereafter. Toxicity was evaluated using the CTCAE v4.0. All the safety data during adjuvant therapy, even if it was off protocol, were included for analysis. Imaging tests were planned at every 12 weeks after the start of treatment, and additional imaging tests were performed to confirm recurrence if clinically suspected. Treatment duration day was defined from the administration of GC to end of the protocol treatment.

From July 2011 to July 2012, 18 patients from nine institutions were enrolled (Table  1). Median age was 70.5 years (range 55–74). Nine patients (50 %) had extrahepatic bile duct cancer, four (22 %) had gallbladder cancer, four (22 %) had ampullary cancer and one (6 %) had intrahepatic bile duct cancer. Pancreatoduodenectomy was performed in 12 patients (67 %), simple to a radical or extended cholecystectomy in 5 (28 %), and bile duct resection and partial hepatectomy in 3 (17 %). Median time of initiation of adjuvant therapy after surgical intervention was 49.7 days (range 29–72). Postoperative complications were seen in six patients (33 %). Fifteen patients (83 %) had a negative margin (R0) and three (17 %) had a microscopically positive margin (R1).
Table 1
Baseline characteristics of patients ( N = 18)
aSome are overlapping

One DLT was observed in three patients at Level 1 during the first 6 weeks, namely grade 4 neutropenia. This dosage level was then expanded with three additional patients, and no further DLTs were observed. According to the recommendation from the DSMC, a total of 18 patients were enrolled at Level 1 to thoroughly evaluate DLT and RD, then one patient who withdrew consent was excluded from evaluation of DLT. One DLT among 17 patients was observed in Level 1 during the first 6 weeks. Throughout the entire study, six (33 %) patients completed protocol treatment. Eight (44 %) dropped out due to the need for a second dose reduction. Two did not meet starting criteria for creatinine with a grade 1 increase in CTCAE v4.0. One had rapid tumor progression and died within 30 days after the last administration of GC. One withdrew consent.
Overall, we ensured the safety of Level 1, the standard dose of the GC regimen, and defined it as the RD. MTD was not defined in this study because we did not plan to escalate the dosage of GC more than the standard dose.

Overall, hematological toxic events were common, the most common of which was neutropenia (Table  2). Grade 3–4 neutropenia, leucopenia, anemia and thrombocytopenia were observed in 56, 33, 0 and 6 % of patients during the first 6 weeks and in 94, 56, 22 and 6 % of patients throughout the entire course of treatment, respectively. Febrile neutropenia was not seen in this study.
Table 2
Hematological adverse events
CTCAE common terminology criteria for adverse events

Looking to improve the outcome of patients with BTC, we conducted a Phase I study of GC as adjuvant chemotherapy for BTC in patients undergoing curative resection without major hepatectomy. To the best of our knowledge, this is the first study which investigates the safety and feasibility of standard GC regimen as adjuvant setting for BTC.
Gemcitabine is rapidly metabolized to an inactive metabolite, 2′,2′-difluorodeoxyuridine by cytidine deaminase [ 15], which is expressed at varying levels in the human tissues [ 16], and the rapid clearance of gemcitabine can be attributed to its plentiful occurrence in the liver [ 17]. We were worried that a severe adverse event during adjuvant chemotherapy might occur after major hepatectomy and that patients would not tolerate standard GC therapy. Therefore, we excluded patients with BTC undergoing major hepatectomy on the basis of findings that patients with elevated bilirubin levels are at increased risk of hepatic injury with gemcitabine treatment [ 18] and that partially hepatectomized rats showed an increase in the area under the curve of cisplatin [ 19]. For the patients with BTC undergoing major hepatectomy, we are currently conducting another Phase I trials which is expected to define the RD of gemcitabine or S-1, respectively.
With regard to the treatment of advanced BTC, the BT-22 trial in Japan [ 14] showed a higher frequency of hematological adverse events during GC treatment than the ABC-02 trial in the UK [ 13]. Particularly with the GC regimen, rates of grade 3–4 neutropenia, leucopenia, thrombocytopenia and anemia, respectively, were 56.1, 29.3, 39.0 and 36.6 % in the BT-22 trial versus 25.3, 15.7 8.6, and 7.6 % in the ABC-02 trial. These differences in the frequency of hematological adverse events might have been due to ethnic differences. In this present adjuvant study, grade 3–4 neutropenia and leucopenia were more common with rates of 56 and 33 % of cases during the first 6 weeks and 94 % and 56 % throughout the entire course of treatment. We experienced more frequent hematological adverse events compared to the BT-22 trial; however, we speculate that postoperative damage might be related to such adverse events. Despite these relatively severe hematological adverse events, only one patient suffered from pneumonia with grade 1–2 neutropenia, and all adverse events were manageable.
Anzeige
Although hematological adverse events with the standard dose of GC were more frequent in the adjuvant than in the advanced setting, the standard dose might nevertheless be feasible for adjuvant chemotherapy for BTC in patients undergoing curative resection without major hepatectomy. From this study, we have defined the standard dose of GC as the RD under careful observation. Because our present protocol required that patients needing a second dose reduction should be off protocol, eight of 18 patients (44 %) resulted in cessation of protocol treatment due to second dose reduction. However, now we are planning to start a subsequent phase II trial for patients in this setting, and the criteria for dose reduction should be revised to allow well-planned second dose reduction, which would in turn allow more intensive cumulative dosing with adjuvant GC. Furthermore, we have to pay more attention to patient care to prevent severe adverse events, and further clinical trials will be warranted to improve the outcome of patients with BTC.

We thank all the people related to this study, patients, caregivers, physicians, medical workers, data manager, Dr. Takuji Okusaka (National Cancer Center Hospital, Department of Hepatobiliary and Pancreatic Oncology) and Dr. Michiaki Unno (Division of Hepato-Biliary-Pancreatic Surgery, Department of Surgery, Tohoku University Graduate School of Medicine) for DSMC, Ms. Masami Kashibou for data management and Mr. Donald Chow for medical writing. This work was Independent Research and Development. Tatsuya Ioka received research funding from Yakult Honsha, Taiho Pharmaceutical Co. Akihito Tsuji received a lecture fee from Taiho Pharmaceutical Co. All remaining authors have declared no conflicts of interest.
Open AccessThis article is distributed under the terms of the Creative Commons Attribution License which permits any use, distribution, and reproduction in any medium, provided the original author(s) and the source are credited. 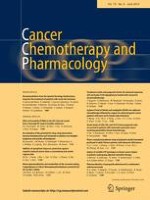 Pharmacokinetics of pazopanib administered in combination with bevacizumab