French military physicians serving in deployment are confronted with pediatric polytrauma patients (PPP) during the provision of medical aid to civilian populations. The objectives of this study were to describe the current care of PPPs during these missions, to report difficulties encountered and to evaluate the training of doctors for management of PPPs in the field.

A descriptive epidemiological study based on a questionnaire sent to physicians who had been deployed overseas.

91 doctors participated. Their mean age was 35 years. 86% of the doctors managed children whilst serving overseas, of which 54% were PPPs. The incidence of pediatric polytrauma varied according to the country, but overall from 1129 emergencies reported during overseas missions, 11% were PPPs. Penetrating traumas represented 37% of cases; 24% were circulatory distress and 19% were massive bleeding. 80% of the doctors reported a lack of pediatric trauma experience, less than 5% had received appropriate in-service training and only 9% had worked in pediatric emergency facilities in France. The equipment available for PPPs in the field was often poorly understood and frequently considered to be insufficient.

The occurrence of PPPs of war is rare and complex, but care of older children it is similar to that required for adults. Preparation for PPP management, it could be optimized by identifying risks which alter depending on the country of deployment, such as the logistical organization of the battlefield chain of care. Improvements in doctors’ pediatric trauma training should be individualized, based on their mission needs. 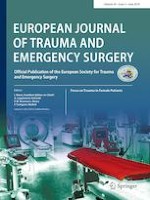 Correction to: Compartment pressures in children with normal and fractured lower extremities