Vision loss in central retinal vein occlusion (CRVO) is mostly caused by macular edema (ME) and can be treated with intravitreal bevacizumab injections. The goal of this study was to identify predictive factors for improvement in visual acuity.

Three hundred and sixteen eyes of six centres having received intravitreal bevacizumab for ME due to CRVO were enrolled in this multicentre, retrospective, interventional case series. The follow-up time was 24 to 48 weeks. Investigated patient characteristics were pretreatment, duration of CRVO prior to the first injection, initial best-corrected visual acuity (BCVA), baseline central retinal thickness as measured by optical coherence tomography, gender, eye, age, comorbidity with glaucoma, systemic hypertension, or diabetes mellitus. 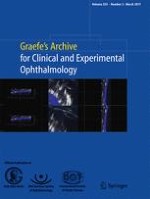 Intraocular use of acid violet 17 at a concentration of 1.5 mg/ml is not safe

Letter in response to letter: intraocular use of acid violet 17 at a concentration of 1.5 mg/ml is not safe

Proliferative Vitreoretinopathie-Prozess – „To heal or not to heal“