Analyses of the relationship between levels of implementation and outcomes of school-based social and emotional learning (SEL) interventions are relatively infrequent and are typically narrowly focused. Thus, our objective was to assess the relationship between variability in a range of implementation dimensions and intervention outcomes in the Promoting Alternative Thinking Strategies (PATHS) curriculum. Implementation of PATHS was examined in 69 classrooms across 23 schools in the first year of a major randomized controlled trial. Implementation data were generated via classroom-level structured observations. In addition to factual data on dosage and reach, exploratory factor analysis of observer ratings revealed two distinct implementation dimensions, namely, “quality and participant responsiveness” and “procedural fidelity.” Student social-emotional skills, pro-social behavior, internalizing symptoms, and externalizing problems were captured through child self-report and teacher informant-report surveys (N = 1721). Hierarchical linear modeling of study data revealed that higher implementation quality and participant responsiveness was associated with significantly lower ratings of students’ externalizing problems at 12-month follow-up. Conversely, and contrary to expectations, higher dosage was associated with significantly lower pro-social behavior and social-emotional skills at 12-month follow-up. No significant associations were found between variability in either procedural fidelity or reach and any intervention outcomes. The implications of these findings are discussed, and study limitations are noted. 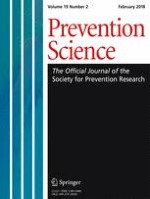 Predictors of Adult Marijuana Use Among Parents and Nonparents

School, Friends, and Substance Use: Gender Differences on the Influence of Attitudes Toward School and Close Friend Networks on Cannabis Involvement

Testing the Amotivational Syndrome: Marijuana Use Longitudinally Predicts Lower Self-Efficacy Even After Controlling for Demographics, Personality, and Alcohol and Cigarette Use

Policy and Prevention Approaches for Disordered and Hazardous Gaming and Internet Use: an International Perspective