Tinnitus, also known as phantom auditory perception, is an annoying symptom and 13–17% of population reports bothersome tinnitus. Cochlear synaptic tinnitus is the most common type. Many treatments have been tried but none is yet considered to be well established. To evaluate effect of Inj.Caroverine and Ginkgo Biloba extract in cochlear synaptic tinnitus in terms of improving tinnitus grading, tinnitus matching and quality of life of patient. It is Randomised controlled study, conducted in department of ENT, on 86 patients, who met inclusion criteria, divided into 4 groups. Gr1—Inj Caroverin, Gr2—Inj Placebo, Gr3—Ginkgo Biloba extract, Gr4—Placebo as extract. A single dose infusion of caroverine immediately improves tinnitus grading and matching and provides immediate relief in reducing severity of tinnitus in 54.54% cases but improvement was not sustained in caroverine group at 3 month and 6 month follow-up after infusion. Ginkgo biloba also is effective in improving tinnitus grading and matching in 31.8% cases and improvement was sustained in ginkgo biloba group even after 3 month of cessation of treatment i.e. at 6 month follow-up. It is suggested that Inj.Caroverine as intravenous infusion should be given in severe cases of tinnitus to reduce its severity immediately and then patient should be put on Tab.Ginkgo biloba for a period of 3 months to provide sustained and long lasting relief. Thus combination therapy of Inj.Caroverin and Tab.Ginkgo Biloba, appropriately tailored to the need of patient will provide better results in greater majority of patients.
Anzeige 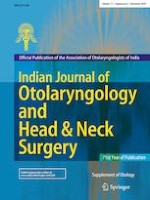 How Efficacious is HRCT Temporal Bone in Determining the Ossicular Erosion in Cases of Safe and Limited Squamous Type CSOM?