RhoA and RhoC are closely related, small GTPases that are clearly involved in breast cancer tumorigenesis. Nonetheless, their specific roles in the control of estrogen receptor alpha (ERα) activities have not been elucidated.

We used siRNA sequences to specifically down-regulate RhoA and RhoC expression in ERα-positive breast adenocarcinoma MCF-7 cells. We then analyzed the consequences of down-regulation on ERα expression, ERα recruitment to the promoters of four target genes, and the mRNA levels of those genes.

We demonstrated that RhoA and RhoC clearly and similarly modulated ERα recruitment to the vitellogenin estrogen responsive element (ERE) present in a luciferase reporter gene and to the promoters of progesterone receptor (PR), cathepsin D, and pS2 genes. Besides, RhoA up-regulated the ERE-luciferase reporter gene activity and PR mRNA expression and tended to down-regulate cathepsin D and pS2 mRNA expression. Conversely, RhoC inhibition had no significant effect at the mRNA level. Furthermore, RhoA inhibition, and to a lesser extent RhoC inhibition, increased ERα expression. No alteration in ERα mRNA levels was observed, suggesting potential post-translational control.

Taken together, our results strongly suggest that RhoA and RhoC play different, but clear, roles in ERα signaling. These GTPases are definitely involved, along with RhoB, in ERα recruitment and, to some extent, ERα cofactor balance. We hypothesize a differential role of RhoA in breast cancer tumors that depend on hormone status. 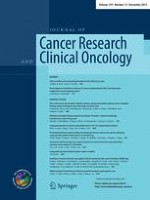 Impact of chemotherapy and radiotherapy in childhood on fertility in adulthood: the FeCt—survey of childhood cancer survivors in Germany

Percutaneous ablation therapy versus surgical resection in the treatment for early-stage hepatocellular carcinoma: a meta-analysis of 21,494 patients

Effect of the tyrosine kinase inhibitor nilotinib in patients with hypereosinophilic syndrome/chronic eosinophilic leukemia: analysis of the phase 2, open-label, single-arm A2101 study