Osteonecrosis of the jaw (ONJ) is an adverse effect that is associated with bisphosphonate (BP) use. Little data are available on risk factors influencing the time of treatment until an osteonecrosis occurs.

From 1 Dec 2004 until 21 Sep 2012, the German Register collected all patients with validated diagnoses of ONJ (N = 1,229) that were reported to the national pharmaco-vigilance system or to the Register directly. We analysed 963 patients with cancerous disease and an ONJ during i.v. BP treatment. Duration of BP treatment until first diagnosis of ONJ and Kaplan–Meier curves of ONJ-free survival were analysed stratified by gender, type of BP and type of cancer.

Main indications for BP treatment were breast cancer (36 %), multiple myeloma (24 %), prostate cancer (16 %) and kidney cancer (4 %). Men suffered from their ONJ earlier than women. A total of 780 patients (81 %) had their ONJ during zoledronate treatment, 93 (10 %) under pamidronate and 90 (9 %) under ibandronate treatment. ONJ-free survival in single BP users was significantly longer in pamidronate-treated patients than in zoledronate or ibandronate users. Ibandronate users had the shortest median duration of treatment (17 months), similar to that of zoledronate users (21.5 months). Sequential prescription of two different BPs prolonged the period of overall BP treatment until an ONJ occurred. Time of BP treatment was shortest in patients with kidney cancer. Age or a concomitant osteoporosis did not influence the time to event of an ONJ.

Systemic risk factors such as gender play a significant role in certain subgroups only. Comparative analysis of different cancer patients helps the treating oncologist/dentist to identify patients with a more imminent risk to develop an ONJ (i.e. kidney cancer, ibandronate/zoledronate use).

Titel
Risk factors influencing the duration of treatment with bisphosphonates until occurrence of an osteonecrosis of the jaw in 963 cancer patients
Autoren:
Tatjana I. Gabbert
Bodo Hoffmeister
Dieter Felsenberg 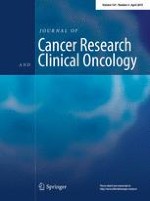 Cytokines: shifting the balance between glioma cells and tumor microenvironment after irradiation

Expression and clinicopathological significance of EED, SUZ12 and EZH2 mRNA in colorectal cancer