Role of Cyclooxygenase-2 in Relation to Nitric Oxide and Endothelin-1 on Pathogenesis of Cerebral Vasospasm After Subarachnoid Hemorrhage in Rabbit | springermedizin.de Skip to main content
TOOLBAR 1 2 3 4
SUCHE MENÜ 1 2 3 4

Endothelial dysfunctions that include decreased nitric oxide (NO) bioactivity and increased endothelin-1 (ET-1) bioactivity have been considered to be involved in the pathogenesis of cerebral vasospasm (CVS) after aneurysmal subarachnoid hemorrhage (SAH). Recent cardiovascular studies have revealed that cyclooxygenase-2 (COX-2) is involved in a disturbance in cross-talk between NO and ET-1. COX-2 expression was detected in the endothelial cells of a spastic artery after experimental SAH; however, the pathophysiological significance of COX-2 in relation to CVS remains unclear. The aim of this study was to investigate the role of COX-2 in relation to NO and ET-1 in the pathogenesis of CVS by using the COX-2 selective inhibitor, celecoxib. In the SAH group, SAH was simulated using the double-hemorrhage rabbit model. In the celecoxib group, SAH was simulated and celecoxib was administered. The basilar artery was extracted on day 5 and examined. The cross-section area of the basilar artery in the celecoxib group was significantly larger than in the SAH group. An increased expression of COX-2, ET-1, and ETA receptor (ETAR), and a decreased expression of endothelial NO synthase (eNOS) were seen in the SAH group. In the celecoxib group compared to the SAH group, expression of COX-2, ET-1, and ETAR were statistically significantly decreased, and eNOS expression was significantly increased. COX-2 might be involved in the pathogenesis of CVS due to up-regulation of ET-1 and ETAR and down-regulation of eNOS, and celecoxib may potentially serve as an agent in the prevention of CVS after SAH. 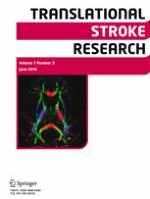 After Intracerebral Hemorrhage, Oligodendrocyte Precursors Proliferate and Differentiate Inside White-Matter Tracts in the Rat Striatum