The aim of the present study was to investigate whether the new method of complete mesocolic excision (CME) with a high (apical) vascular tie (D3 resection) had an immediate effect compared with a conventional (standard) approach even in those patients without lymph node metastases.

A cohort of 189 consecutive patients with tumour–nodal–metastasis (TNM) stages I–II and a mean age of 73 years were operated on in the period from January 2007 to December 2008 in three community teaching hospitals. The CME approach (n = 89), used in hospital A, was compared to the standard technique used (n = 105) in two other hospitals, B and C. Lymph node yields from the specimens were used as a surrogate measure of radical resections. Outcome was analysed after a median follow-up of 50.2 months.

Compared with the standard (D2) approach, introduction of CME surgical management of colon cancer resulted in a significant immediate improvement of 3-year survival for patients with TNM stage I–II tumours as assessed by OS and DFS. 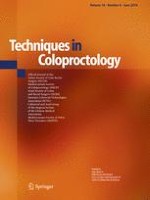 The clinical results of the Turnbull–Cutait delayed coloanal anastomosis: a systematic review