main-content
nach oben
Zurück zum Suchergebnis
​
print
PDF-Version jetzt herunterladen
​
download
Inhaltsverzeichnis
​
insite
Ausgabenarchiv
​
archive
​
insite
Drucken
​
print
» Zur Zusammenfassung PDF-Version jetzt herunterladen
Small intestinal bleeding is often the first symptom of small intestinal disease. Since the small intestine is about 5–6 m long, occupying a large zone in the abdominal cavity, conventional endoscopy and X-ray studies cannot make a thorough examination [ 1– 3]. Double-balloon enteroscopy may provide adequate examination of the small intestine [ 4– 6]. However, there are some patients whose small intestinal bleeding lesion may not be detected with enteroscopy. Since there is a “blind region” to both sides, especially when for the bleeding is caused by a vascular malformation; it then generally depends on angiography, but this has the limitations of an invasive procedure time consumption and high cost [ 7– 9]. Recently, we used the method of contrast-enhanced CT combined with enteroscopy for the diagnosis of small intestinal vascular malformation in ten patients. Our experience is reported as follows.

Ten patients were diagnosed as gastrointestinal bleeding in our department from March 2006 to October 2010. No bleeding lesions were detected with gastroscopy and colonoscopy. They underwent enteroscopy through mouth and/or anus. In the patients with active bleeding lesions suspected of small intestinal vascular bleeding, abdominal vascular-enhanced CT examination was performed. The patients without active bleeding lesions also underwent abdominal contrast-enhanced CT examination. Among the ten patients, there were seven males and three females, age range was 35–65 years, mean age was 51 years. All the patients lacked the contraindications for enteroscopy, including severe heart, lung, and liver disease, severe weakness, and complete intestinal obstruction.
Anzeige

Double-balloon enteroscopy with the Fujinon EN-450P5/20 (Fujinon company, Japan) was accomplished with the repeated charge and discharge of the balloons, and the repeated push and pull of the trocar sheath to advanced the enteroscope [ 10].

The assistant and doctor cooperate to fulfill the procedure: in enteroscopy examination through the mouth the enteroscope progresses to the inferior segment of the ileum: the enteroscope advances to the junctional zone of the jejunoileum. When a bleeding lesion was not detected through one side, diluent methylene blue of 0.5 mL was injected beneath the mucous membrane at several sites, which facilitates confirming the site when the examination is performed through the other side. For some patients, X-ray was used to observe the extent of penetration by the enteroscope [ 11, 12].

Light speed VCT 64 layer spiral CT (GE company, USA) was used, scan range included the entire abdomen, plain scan was performed first, parameters: tube tension was 120 kV, tube current was 36 mAs, width of collimator was 40 mm, rack rotation time was 0.6 s/circle, pitch was 1.375:1, and slice thickness was 1.25 mm. Then enhancement scanning was performed, non-ionotropic contrast agent of ultravist 370 was used, injected as a bolus through a peripheral vein, the dosage was 1.5 mL/kg body weight, the flow rate was 3.5–4.5 mL/s. After enhancement scanning, image reconstruction was performed with the original data, after reconstruction all the images were transmitted to the work station, where post processing was taken, including multi-planar reformation (MPR) and curved planar reconstruction (CPR). The best images were screened for analysis and diagnosis.
Anzeige

The CT images were separately analyzed by two radiologists with rich experience; when the conclusion was not the same, the two radiologists discussed the images until the same conclusion was reached. The images of enteroscopy and CT were compared with the surgical result. The clinical value of applying multi-slice spiral CT (MSCT) in the diagnosis of small intestinal vascular malformation was evaluated.

Of the ten patients who underwent contrast-enhanced CT, small intestinal vascular malformations were detected in all and these were confirmed with surgical and pathologic results (shown in Table  1). 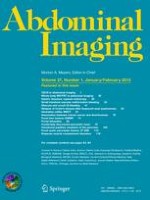 RE: Mass lesions in chronic pancreatitis: benign or malignant? An “evidence-based practice” approach. A caveat regarding autoimmune pancreatitis