Paralysis of the structures in the head and neck due to stroke or other neurological disorder often causes dysphagia (difficulty in swallowing). Patients with dysphagia have a significantly higher incidence of aspiration pneumonia and death. The recurrent laryngeal nerve (RLN), which innervates the intrinsic laryngeal muscles that control the vocal folds, travels superiorly in parallel to the trachea in the tracheoesophageal groove. This study tests the hypothesis that functional electrical stimulation (FES) applied via transtracheal electrodes can produce controlled vocal fold adduction. Bipolar electrodes were placed at 15° intervals around the interior mucosal surface of the canine trachea, and current was applied to the tissue while electromyography (EMG) from the intrinsic laryngeal muscles and vocal fold movement visualization via laryngoscopy were recorded. The lowest EMG thresholds were found at an average location of 100° to the left of the ventral midsagittal line and 128° to the right. A rotatable pair of bipolar electrodes spaced 230° apart were able to stimulate bilaterally both RLNs in every subject. Laryngoscopy showed complete glottal closure with transtracheal stimulation in six of the eight subjects, and this closure was maintained under simultaneous FES-induced laryngeal elevation. Transtracheal stimulation is an effective tool for minimally invasive application of FES to induce vocal fold adduction, providing an alternative mechanism to study airway protection. 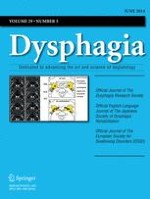 Erratum to: Effect of Gabapentin on Swallowing During and After Chemoradiation for Oropharyngeal Squamous Cell Cancer