We aim to evaluate the action of transcutaneous laser in the initial wound healing process. The use of low-level laser therapy (LLLT) has proven to be effective on inflammatory modulation and wound healing. The trial was performed on five groups of rats, through a dorsal incision. All groups received treatment on auricular artery. Groups 1 and 3 were treated with transcutaneous LLLT over a period of 15 min. Groups 2 and 4 received one and two inactive laser applications (placebo), respectively. Group 5 was the control one. Blood samples were collected 2 h after the last application of LLLT so that cytokine levels could be measured by ELISA. Tissue fragments were harvested for morphometric, histomorphometric, and RT-qPCR analyses. The morphometric analysis revealed a greater decrease in the wounded area in G1 when compared with G2, whereas in G3, the improvement in the area was greater when compared with G4. Finally, the histomorphometric analysis showed that G1 was the group closer to G5 in terms of collagen fiber count. G2 and G4 had higher amounts of collagen fibers than G5 while G3 had a lower quantity. The use of the transcutaneous LLLT in the current study influenced the wound healing process. 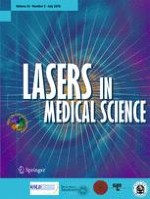 Low-level laser therapy in the management of plantar fasciitis: a randomized controlled trial

Evaluation of the therapeutic effects of led (λ627 ± 10 nm) on the initial phase of ankle sprain treatment: a randomised placebo-controlled clinical trial