The nuclear factor-kappa B (NF-κB) signalling pathway is a key regulator of inflammation and has been associated with carcinogenesis (Merga et al. 2016). The NF-κB family comprised five hetero or homodimers: RelA (p65), RelB, NF-κB1 (p50 and its precursor p105), NF-κB2 (p52 and its precursor p100), and c-Rel (Pereira and Oakley 2008). In an inactive state, NF-κB dimers are bound to inhibitors of NF-κB (IκB) [such as inhibitory κB kinases (IKK) or their inactive precursors (i.e. p105 and p100)]. The classical or canonical NF-κB signalling pathway is activated by cytokines, such as IL-1 and TNF, T-cell receptors (TCR), or B-cell receptors (BCR) which stimulate the IKK complex, phosphorylating p105 which releases the NF-κB dimers to the nucleus where they activate gene expression. Three IKKs, IKKα, IKKβ and IKKγ or NEMO (NF-κB essential modulator), are involved in the canonical pathway. The alternative pathway (non-canonical pathway) originates through B-cell activation factor (BAFF-R), lymphotoxin β-receptor (LTβR), CF40 receptor activator for nuclear factor-kappa B (RANK), and TNFR2, which in turn activate adaptor protein NF-κB-inducing kinase (NIK) which activates IKKα. IKKα activity induces phosphorylation of RelB and p100. It has been proposed that the canonical pathway is associated with an acute phase response and is integrated with the non-canonical pathway for a more sustained immunological response (Merga et al. 2016). In colon cancer specifically, IKKB-induced NF-κB activation in intestinal epithelial cells and its corresponding inflammation appears to have an essential role in tumour formation (Slattery and Fitzpatrick 2009).
NF-κB is a transcription factor which, when activated can regulate over 200 genes involved in inflammation and cell function and survival (Pereira and Oakley 2008). MiRNAs, small non-coding RNAs that bind to the 3′UTR of the protein-coding mRNAs and inhibit their translation, may also be transcriptional targets. This dynamic provides a mechanism for dysregulation of genes through the activation of transcription factors such as NF-κB (Hoesel and Schmid 2013). Several miRNAs, including let-7, miR-9, miR-21, miR-143, miR-146 and miR-224, are transcriptional targets of NF-κB (Hoesel and Schmid 2013). These miRNAs have been shown to be involved in feedback mechanisms that influence the NF-κB signalling pathway by either targeting upstream signalling molecules or members of the NF-κB family. Let-7 has been shown to target IL-6 in that a reduction in Let-7 results in higher levels of IL-6 and activation of NF-κB in a positive feedback loop (Iliopoulos et al. 2009). It has been suggested that miR-520e may modify cell proliferation by targeting NIK (Zhang et al. 2012). Other studies have shown that miR-15a, miR-16 and miR-223 can influence IKKα protein expression (Li et al. 2010). While these data support the co-regulatory functions of NF-κB and miRNAs, there has not been a systematic evaluation of the NF-κB signalling pathway as it relates to miRNAs.
Anzeige
There is strong evidence to suggest that inflammation is a key element in the etiology of colorectal cancer (CRC) [reviewed in (Slattery and Fitzpatrick 2009)]. In this paper we examine expression levels of 92 genes in the NF-κB signalling pathway. We focus on genes within this signalling pathway that are dysregulated, in that the expression levels in the tumours are statistically different than in normal mucosa with a fold change (FC) of difference that is > 1.50 or < 0.67. We examine differential expression of miRNAs with dysregulated pathway genes. Our aim is to broaden our understanding of the NF-κB signalling pathway as it relates to CRC.

Study participants come from two population-based case–control studies that included all incident colon and rectal cancer patients diagnosed between 30 and 79 years of age in Utah or who were members of Kaiser Permanente Northern California (KPNC). Participants were non-Hispanic white, Hispanic or black for the colon cancer study; the rectal cancer study also included people of Asian race (Slattery et al. 1997, 2003). Cases were verified by tumour registry as a first primary adenocarcinoma of the colon or rectum, diagnosed between October 1991 and September 1994 (colon study) and between May 1997 and May 2001 (rectal study) (Slattery et al. 2016). The Institutional Review Boards at the University of Utah and at KPNC approved the study.

Methods for RNA processing and mRNA and miRNA analysis have been previously described and are summarised here (Slattery et al. 2017a, b). Formalin-fixed paraffin-embedded tissue from the initial biopsy or surgery was used to extract RNA. RNA was extracted, isolated and purified from carcinoma tissue and adjacent normal mucosa as previously described (Slattery et al. 2015). We observed no differences in RNA quality based on age of the tissue.

Total RNA from 245 colorectal carcinoma and normal mucosa pairs was chosen for sequencing based on availability of RNA and high quality miRNA data in order to have both mRNA and miRNA from the same individuals; the 217 pairs that passed quality control (QC) were used in these analyses (Pellatt et al. 2016a, b). RNA library construction was performed with the Illumina TruSeq Stranded Total RNA Sample Preparation Kit with Ribo-Zero. The samples were then fragmented and primed for cDNA synthesis, adapters were then ligated onto the cDNA and the resulting samples were then amplified using PCR; the amplified library was then purified using Agencourt AMPure XP beads. A more detailed description of the methods can be found in our previous work (Slattery et al. 2015a, b). Illumina TruSeq v3 single-read flow cell and a 50 cycle single-read sequence run were performed on an Illumina HiSeq instrument. Reads were aligned to a sequence database containing the human genome (build GRCh37/hg19, February 2009 from genome.ucsc.edu) and alignment was performed using novoalign v2.08.01. Total gene counts were calculated for each exon and UTR of the genes using gene coordinates obtained from http://​genome.​ucsc.​edu. Genes that were not expressed in our RNA-Seq data or for which the expression was missing for the majority of samples were excluded from further analysis (Slattery et al. 2015a, b).
Anzeige

The Agilent Human miRNA Microarray V19.0 was used. Data were required to pass QC parameters established by Agilent that included tests for excessive background fluorescence, excessive variation among probe sequence replicates on the array, and measures of the total gene signal on the array to assess low signal. Samples failing to meet quality standards were relabelled, hybridised to arrays and re-scanned. If a sample failed QC assessment a second time, the sample was excluded from analysis. The repeatability associated with this microarray was extremely high ( r = 0.98) (Slattery et al. 2016); comparison of miRNA expression levels obtained from the Agilent microarray to those obtained from qPCR had an agreement of 100% in terms of directionality of findings and the FCs were almost identical (Pellatt et al. 2016). To normalise differences in miRNA expression that could be attributed to the array, amount of RNA, location on array, or factors that could erroneously influence miRNA expression levels, total gene signal was normalised by multiplying each sample by a scaling factor which was the median of the 75th percentiles of all the samples divided by the individual 75th percentile of each sample (Agilent GeneSpring User Manual).

The Kyoto Encyclopedia of Genes and Genomes (KEGG) ( http://​www.​genome.​jp/​kegg-gin/​show_​pathway?​hsa04064) Pathway map for NF-Kappa B Signalling was used to identify genes. We identified 95 genes (Supplemental Table 1) in this signalling pathway; 92 of these genes had sufficient expression in our CRC tissue for further analysis.

We analysed miRNAs and targeted mRNAs for seed-region matches. The mRNA 3′ UTR FASTA as well as the seed-region sequence of the associated miRNA were analysed to determine seed-region pairings between miRNA and mRNA. MiRNA seed regions were calculated as described in our previous work (Mullany et al. 2016); we calculated and included seeds of six, seven and eight nucleotides in length. Our hypothesis is that a seed match would increase the likelihood that identified genes associated with a specific miRNA were more likely to have a direct association given a higher propensity for binding. As miRTarBase (Chou et al. 2016) uses findings from many different investigations spanning across years and alignments, we used FASTA sequences generated from both GRCh37 and GRCh38 Homo sapiens alignments, using UCSC Table browser ( https://​genome.​ucsc.​edu/​cgi-bin/​hgTables) (Karolchik et al. 2004). We downloaded FASTA sequences that matched our Ensembl IDs and had a consensus coding sequences (CCDS) available. Analysis was done using scripts in R 3.2.3 and in perl 5.018002.

The majority of cases were located in the colon (77.9%) rather than the rectum (22.1%) (Table  1).
Table 1
Description of study population
The mean age of the study population was 64.8 years and 54.4% of the population were male. Non-Hispanic white cases were the predominate race (74.2%) followed by Hispanic (6.5%) and Black (3.7%). The majority of tumours (86.6%) were considered microsatellite stable while 13.4% had MSI.
Anzeige
Twenty-two genes were significantly downregulated when considering a FC of < 0.67 and nine genes were significantly upregulated with a FC of > 1.50 (Table  2).
Table 2
Associations between paired carcinoma and normal genes expression in the KEGG NF-κB signalling pathway
Specific to MSS tumours, CD14 had a FC of 0.66 compared to a FC of 0.68 overall and CSNK2A1 had a FC of 1.54 for MSS tumours compared to 1.49 overall (Supplemental Table 2 for MSS results). Evaluation of MSI-specific tumours showed that two additional genes were downregulated, CARD11 and VCAM1 (FC 0.37 and 0.59, respectively) and six genes were upregulated ( LYN FC 1.59, TICAM2 FC 1.64, ICAM1 FC 1.91, IL1B FC 2.06, CCL4 FC 2.72, and PTGS2 FC 3.23) that were statistically significant (Supplemental Table 3 for MSI-specific results). Among the most downregulated genes were CCL13 (FC 0.11), CCL19 (FC 0.14), PRKCB (FC 0.28, TNFRSF13C (FC0.29), and CD40LG (FC0.30). Seven genes were upregulated with a FC greater than 2.0 ( CSNK2A2 FC 2.02, CSNK2A1P FC 2.17, IRAK1 FC 2.24, BCL2L1 FC 2.25, PLAU FC 2.52, CXCL2 FC 2.55, and IL8 FC 5.12). Figure  1 shows the location of these genes in the NF-κB signalling pathway.
×
Anzeige
Sixteen of the dysregulated genes were associated with 40 miRNAs (Table  3).
Table 3
Associations between differentially expressed genes in the NF-kB Signalling Pathway and miRNA differential expression
aSeed-region matches in bold
bThe beta coefficient was inverse even though both mRNA and miRNA were downregulated
Of the total 76 miRNA:mRNA associations from these 16 genes and 40 miRNAs, 38 had seed-region matches and 19 of these matches showed an inverse association between the differential expression of the miRNA and the differential expression of the mRNA. TNFRSF11A was associated with the greatest number of miRNAs ( N = 15). PLCG1 was associated with 12 miRNAs, TRAF5 with eight miRNAs, CXCL12 with six miRNAs, and CCL21 and PLCG2 each with five miRNAs. The miRNA and mRNA associations are further summarised in Table  4.
Table 4
Summary of NF-κB signalling pathway gene expression and miRNA associations
Bold text indicates inverse associations
Anzeige
The miRNAs with the greatest number of genes associated with these were miR-150-5p with eight genes (five with a seed-region match), miR-195-5p with four genes (two with a seed-region match), miR-203a with five genes (four with a seed-region match), miR-20b-5p with four genes (four with a seed-region match), miR-650 with six genes (one with a seed-region match), and miR-92a-3p with five genes (no seed-region matches). Interestingly, the six genes associated with miR-650 also were associated with miR-150-5p. The miRNA associations with dysregulated genes can be seen in Fig.  1.

The contents of this manuscript are solely the responsibility of the authors and do not necessarily represent the official view of the National Cancer Institute. We acknowledge Sandra Edwards for data oversight and study management, and Michael Hoffman and Erica Wolff for miRNA analysis. We acknowledge Dr. Bette Caan and the staff at the Kaiser Permanente Northern California for sample and data collection.

This study was supported by NCI Grant CA163683.

Authors have no conflict of interest to report.

All procedures performed in studies involving human participants were in accordance with the ethical standards of the institutional and/or national research committee and with the 1964 Helsinki declaration and its later amendments or comparable ethical standards. The Institutional Review Boards at the University of Utah and at KPNC approved the study.

Informed consent was obtained from participants included in the study.
Open AccessThis article is distributed under the terms of the Creative Commons Attribution 4.0 International License ( http://​creativecommons.​org/​licenses/​by/​4.​0/​), which permits unrestricted use, distribution, and reproduction in any medium, provided you give appropriate credit to the original author(s) and the source, provide a link to the Creative Commons license, and indicate if changes were made. 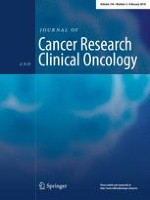 Head and neck rhabdomyosarcoma in children: a 20-year retrospective study at a tertiary referral center