Although genetic factors clearly play a role in the development of atopic dermatitis (AD), the recent dramatic increase in the prevalence of AD in low- and middle-income countries is not consistent with only a role of genetic factors. These findings strongly suggest that environmental factors may play an important role in the pathogenesis of AD. 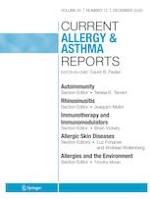 Olfactory Dysfunction in a Mexican Population Outside of COVID-19 Pandemic: Prevalence and Associated Factors (the OLFAMEX Study)

Frequency and Clinical Utility of Olfactory Dysfunction in COVID-19: a Systematic Review and Meta-analysis