The predominance of clear cells in mucoepidermoid carcinomas (MEC) is rare, and cases in which this occurs are termed clear cell variants of MEC. We present a case of a 70-year-old woman complaining of a right buccal mucosal mass, which had increased in size over 1 year. Histological examination revealed the mass to be composed predominantly of clear tumor cells, with mucin-containing cells and intermediate cell-like cells. Immunohistochemistry indicated that the tumor was positive for CK5/6 and p63, but negative for myoepithelial markers such as S-100 protein, αSMA, and calponin. These findings ruled out the possibility of a clear cell myoepithelial carcinoma, which is the most frequently observed type of salivary carcinoma composed predominantly of clear cells. However, it is difficult to distinguish between clear cell variants of MEC and hyalinizing clear cell carcinoma. Therefore, we performed fluorescence in situ hybridization to determine whether MAML2 rearrangement had occurred in this mass. Direct sequencing of the RT-PCR product demonstrated CRTC1-MAML2 fusion between exon 1 of CRTC1 and exon 2 of MAML2. Thus, the diagnosis of clear cell variant of MEC was confirmed. This is the first report of CRTC1-MAML2 fusion gene detection in a clear cell variant of MEC. 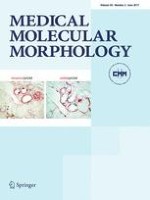 Enhancement of adherence of Helicobacter pylori to host cells by virus: possible mechanism of development of symptoms of gastric disease

Paratesticular dedifferentiated liposarcoma with prominent myxoid stroma: report of a case and review of the literature