To assess drinking occasions (volume and type) according to consumption with food in or outside meals, and location, for six countries.

A total of 10,521 participants aged 4–65 years from Argentina, Brazil, China, Indonesia, Mexico and Uruguay completed a validated 7-day fluid intake record. For each drinking event, the volume consumed, the fluid type, the location of intake, and whether the drink was accompanied by food (meal or snack) or not, was recorded.

Similar drinking behaviors were found in Mexico and Argentina; fluid intake during meals was 48 and 45% of total fluid intake (TFI), respectively. In Brazil (55%), Indonesia (58%) and China (66%) most fluid was consumed without food. In Uruguay, 34% of TFI was with a main meal, 31% with food between meals and 35% without food. Indonesia had the highest median (25–75th percentile) TFI; 2520 (1750–3347) mL/day, and China the lowest 1138 (818–3347) mL/day. Water was consumed with meals for 37% of Chinese and 87% of Indonesian participants, while the four Latin-American American countries showed a preference for sweet drinks; 54% in Mexico, 67% in Brazil, 55% in Argentina and 59% in Uruguay. Diversity in fluid type was noted when drinking with food between meals. Apart from China, most drinking occasions (> 75%) occurred at home.

Three distinct drinking behaviors were identified, namely, drinking with meals, drinking as a stand-alone activity, and a type of ‘grazing’ (i.e., frequent drinks throughout the day) behavior. Most drinking occasions occurred at home. 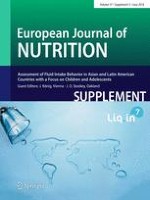 Challenges in the assessment of total fluid intake in children and adolescents: a discussion paper

Fluid intake of children, adolescents and adults in Indonesia: results of the 2016 Liq.In7 national cross-sectional survey