To evaluate whether avoidance of a risk factor associated with loss of pulse (LOP) following femoral artery (FA) catheterization in infants identified from previous study, was associated with decreased incidence of LOP during a prospective evaluation. Since initiation of routine ultrasound guided femoral arterial access (UGFAA) for infants undergoing catheterization in Jan 2003–Dec 2011 (Period-1), our incidence of LOP had stayed steady. Prospective evaluation between Jan 2012–Dec 2014 (Period-2), identified FA-diameter < 3 mm as risk factor for LOP. Between Jan 2015–Dec 2018 (Period-3), an initiative to avoid UGFAA for FA-diameter < 3 mm was implemented to determine whether that led to a decreased incidence of LOP. FA-diameter was measured prior to USGFAA and ratio of outer diameter of arterial sheath to luminal diameter of cannulated artery (OD/AD ratio) was calculated during Periods-2 and 3. The incidence and risk factors for LOP were assessed during the three periods. FA-access rates dropped significantly during Period-3 (56.7% vs. 93.8% and 90.4% during Periods-1 and 2, respectively, p < 0.001). Incidence of LOP in Period-3 decreased to 2.7% compared to 12.5% (Period-1) and 17.4% (Period-2) (p < 0.001). By multivariate analysis, FA size < 3 mm and an OD/AD ratio > 40% were the only significant independent predictors for LOP (OR 6.48, 95% CI 2.3–11.42, p < 0.001 and OR 4.16, 95% CI 1.79–8.65, p < 0.01, respectively). Access of femoral artery < 3 mm and OD/AD ratio > 50% are associated with increased incidence of LOP. Avoidance of these factors may help decrease complications in infants undergoing cardiac catheterizations. 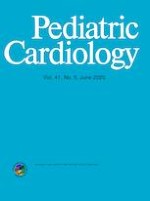