Pediculus humanus humanus (known as body lice) are commonly found in the folds of clothes, and can cause skin disorders when they feed on human blood, resulting in an itching sensation. Body lice are known as vectors of infectious diseases, including typhus, recurrent fever, and trench fever. An infestation with blood-sucking body lice induces severe cutaneous pruritus, and this skin disorder is known as “vagabond’s disease.” A body lice infestation is sometimes complicated with iron deficiency anemia. In the present case, a man in his late 70s died of lethal hypothermia in the outdoors during the winter season. The case history and autopsy findings revealed that the cause of the lethal hypothermia was iron deficiency anemia, which was associated with a prolonged infestation of blood-sucking body lice. Also, he had vagabond’s disease because the skin on his body was abnormal and highly pigmented. This is an unusual autopsy case since the body lice contributed to the cause of the death.
Anzeige 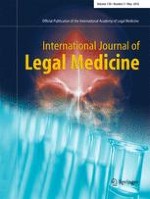 Ornithine transcarbamylase deficiency of a male newborn with fatal outcome

Mixtures with relatives and linked markers