The objective of this paper is to study the reproducibility and anatomical risks of anterior sacrospinous ligament (SSL) fixation associated with paravaginal repair using the Pinnacle™ device (Boston Scientific™).

Eight SSL and ten ATFP were available for analysis. SSL fixations were optimal in four cases, too superficial in three cases, and too high in one case. Mean distance between SSL fixation and ischial spine was 18.6 mm (range 10 to 30 mm). Mean distance between SSL fixation and pudendal nerve was 6.5 mm (range 0 to 15 mm). ATFP fixations were optimal in five cases, good in four cases, and too superficial in one case. In one case (10%), the middle arm of the prosthesis was in contact with the ureter and traction on that arm resulted in ureteral kinking.

Anterior SSL fixation associated with paravaginal repair using the Pinnacle™ device was not reproducible every time in this cadaver study. These results confirm the need for specific training before starting anterior SSL fixations. 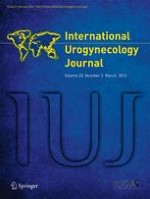