Experimental and clinical studies aimed at investigating the mechanism(s) underlying vascular complications of diabetes indicate that a great number of molecules are involved in the pathogenesis of these complications. Most of these molecules are inflammatory mediators or markers generated by immune or adipose tissue. Some of them, i.e. resistin and sortilin, have been shown to be involved in the cross talk between adipocytes and inflammatory cells. This interaction is an attractive area of research, particularly in type 2 diabetes and obesity. Other proteins, such as adiponectin and visfatin, appear to be more promising as possible vascular markers. In addition, some molecules involved in calcium/phosphorus metabolism, such as klotho and FGF23, have an involvement in the pathogenesis of diabetic vasculopathy, which appears to be dependent on the degree of vascular impairment. Inflammatory markers are a promising tool for treatment decisions while measuring plasma levels of adipokines, sortilin, Klotho and FGF23 in adequately sized longitudinal studies is expected to allow a more precise characterization of diabetic vascular disease and the optimal use of personalized treatment strategies. 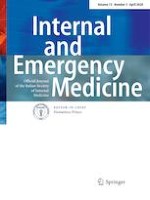 CE - LETTER TO THE EDITOR

D-dimer testing, with gender-specific cutoff levels, is of value to assess the individual risk of venous thromboembolic recurrence in non-elderly patients of both genders: a post hoc analysis of the DULCIS study

Dapagliflozin in patients with heart failure and reduced ejection fraction

CE - LETTER TO THE EDITOR