The sentinel lymph node (SLN) procedure for colon cancer patients has been increasingly performed over the past decade and has shown advantages regarding lymph node staging. However, there are concerns that the manipulation of the colon, particularly the blue dye injection, results in isolated tumor cell dissemination to lymph nodes. Therefore, the objective of the present study was to evaluate whether the blue dye injection during the SLN procedure for colon cancer induces epithelial cell dissemination to the regional lymph nodes using a fake SLN procedure as a model.

One hundred seventy-four colon cancer patients underwent open oncologic colon resection and SLN procedure according to a standardized protocol. For the fake SLN procedure, blue dye was injected ex vivo, into the subserosa of a nontumor-bearing segment of the resected colon in 37 unselected patients. Three levels of each SLN were stained with H&E and with the pancytokeratin marker AE1/AE3 and were analyzed for the presence of cytokeratin positive cells.

Identification of fake SLN was successful in 32 of the 37 patients (86 %). Seventy fake SLN were histologically confirmed. The median number of fake SLN was 2 per patient (range 1–8). None of the fake SLN showed any disseminated epithelial cells. 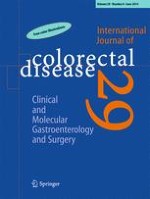