Paget’s disease of bone (PDB) is a metabolic bone disease with distinct geographical and ethnic differences in its pathogenesis. In this study, we aimed to retrospectively analyze the clinical features and the status of diagnosis and treatment of PDB in mainland China to improve the clinician’s understanding of this disease. For this purpose, we conducted a systematic review of 118 articles, including a total of 332 patients with PDB. The results showed that the onset age of PDB in mainland China was 46–60 years. The number of male patients in most age groups was slightly higher than that of female patients, but there was no statistical difference (p > 0.05). The gender ratio (male to female) of PDB in mainland China was significantly different from that in Japan (p < 0.05), but not from that in the USA (p > 0.05). The clinical manifestations of PDB patients in mainland China mainly included ostealgia, bone malformation, hearing loss, and fracture, and bisphosphonate was used as the main treatment drug. These findings were similar to those in Japan, UK, and USA. Total alkaline phosphatase (TALP) level was elevated in about 89.7% of patients, and no correlation between TALP level and ostealgia was observed (p > 0.05). In addition, no difference in TALP level between males and females in each group was observed (p > 0.05). 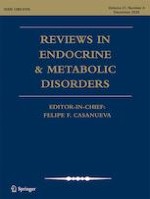 Current perspectives of oleic acid: Regulation of molecular pathways in mitochondrial and endothelial functioning against insulin resistance and diabetes

Endocrine and metabolic aspects of the COVID-19 pandemic

Multidisciplinary management of acromegaly: A consensus

Zinc-alpha2-glycoprotein, dysglycaemia and insulin resistance: a systematic review and meta-analysis

Ketotherapy as an epigenetic modifier in cancer