Amyotrophic lateral sclerosis (ALS) is described as a neurodegenerative disorder. However, neuroinflammation and chemokine expression are prominent pathological finding at sites of injury. Adipsin and adiponectin are molecules that are implicated in the pathogenesis of neurodegenerative and neuroimmune disorders. Adipsin and adiponectin concentrations were determined in the CSF of ALS patients and controls and the relationship of these chemokines with clinical severity and disease duration in ALS was determined. Seventy-seven ALS patients (mean age 49.5 ± 10.4 years) (mean body mass index 23.5 ± 4.5) were included. Twenty patients had bulbar, 53 spinal, and four bulbospinal onset ALS. Median adipsin CSF level was 12,650.94 pg/ml in ALS patients and 3290.98 pg/ml in controls (p < 0.001). Median adiponectin CSF level was 4608 pg/ml in ALS patients and 3453 pg/ml in controls (p = 0.1). No differences were observed in disease duration, progression rate or disease severity. There was a significant positive correlation between adipsin and adiponectin concentrations (r = 0.379, p = 0.01). No correlation with age, body mass index or ALFRS-R score was found. Adipsin was significantly elevated in CSF, suggesting that this chemokine might have a role in ALS pathogenesis. Adiponectin showed a trend towards higher concentrations, but failed to reach statistical significance. Due to the clinical heterogeneity in our cohort, these chemokines do not appear to be associated with disease duration or severity. 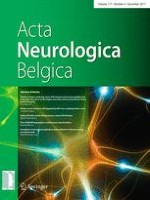