One of the prominent features of HTLV-1-associated myelopathy/tropical spastic paraparesis (HAM/TSP) is the excessive recruitment of leukocytes to the central nervous system (CNS), which leads to an inflammatory response—with chemokines and their receptors playing the main role in this recruitment. The aim of the study was to examine the relation of CXCR1 and CXCR2, both of which are involved in the trafficking of lymphocytes into the CNS, with the outcome of HTLV-1 infection. The mRNA levels of CXCR1 and CXCR2 were examined in peripheral blood mononuclear cells (PBMCs) of HAM/TSP patients, HTLV-1 asymptomatic carriers (ACs), and healthy controls (HCs). Furthermore, the frequency of CD4+ and CD8+ T cells expressing CXCR1 and CXCR2 was evaluated in the studied groups. The results of the present study showed a substantial increase in the mean mRNA expression of CXCR2 in the HAM/TSP patients compared to the HCs and ACs (p < 0.001). A positive correlation was also found between PVL and CXCR2 mRNA expression in the total population of HTLV-1-infected subjects (R = 0.526, p < 0.001). Moreover, the percentage of CD8+ CXCR2-expressing cells was higher in HAM/TSP patients compared to ACs and HCs (p < 0.05, p < 0.01, respectively). Although the percentage of CD4+ CXCR2-expressing cells was higher in HAM/TSP patients than in ACs and HCs, a significant difference was only found between HAM/TSP patients and HCs (p < 0.05). No significant difference in the CXCR1 mRNA expression was observed in the studied groups. The frequency of the CD8+ CXCR1- and CD4+ CXCR1-expressing cells was significantly lower in HAM/TSP patients than in ACs and HCs (p < 0.001 and p < 0.01, respectively). In conclusion, the high frequency of CXCR2 CD8+ T cells and the high levels of CXCR2 mRNA expression in HAM/TSP patients are associated with disease pathogenesis, while the high frequencies of CXCR1 T cells in ACs might suggest that these cells act as effector CD8 T cells and are involved in controlling the viral spread and modulation of the immune response. 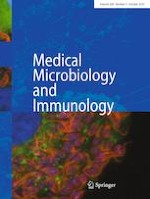