Myotonic dystrophy type 1 (DM1) is a chronic, progressive, and disabling muscle disorder frequently involving other organ systems [1]. The disease is inherited in an autosomal dominant pattern, caused by expansion of a cytosine–thymine–guanine (CTG) triplet repeat in the DMPK gene, and represents the most common muscular dystrophy in adults with an estimated prevalence in Europe of between 10–18/100,000 [2]. Patients with DM1 typically experience muscle weakness and locking (i.e. myotonia), but the phenotypic spectrum is wide and symptoms are variable, which makes the identification and validation of suitable outcome measures for clinical research challenging [3].
The disease burden of DM1 has been investigated in several geographical settings using different study designs and rating-scales, including the Individualized Neuromuscular Quality of Life (INQoL), a patient-reported outcome (PRO) tool developed to measure the impact of neuromuscular disease on various aspects of patients’ life [4]. However, to date, no study has examined specific components of the disease burden of DM1 using the INQoL in a UK setting. The objective of this study was therefore to estimate the prevalence, severity, and difficulties of symptoms of DM1, the impact of the disease on daily, leisure, and work activities, patients’ independence and relationships, as well as emotional well-being and appearance as recorded through the INQoL in adult patients with DM1 from the UK.
Anzeige

The data reported as part of this work were collected in the Myotonic Dystrophy Type 1 Deep Phenotyping to Improve Delivery of Personalized Medicine and Assist in the Planning, Design and Recruitment of Clinical Trials (PhenoDM1) study (ClinicalTrials.gov identifier: NCT02831504). Patients with DM1 were identified and recruited from the specialist neuromuscular clinic at Newcastle University (Newcastle upon Tyne, UK). To be eligible to participate, patients were required to meet the following inclusion criteria: (i) ≥ 18 years of age, (ii) genetically confirmed diagnosis of DM1, (iii) able and willing to provide written informed consent to participate in the study, and (iv) ability to perform the 10 m walking test at selected pace without any assistance (walking devices allowed). Patients with congenital DM were not included in the study. To further minimize reporting bias, incomplete questionnaires or questionnaires with double answers were excluded. Study ethical approval was granted by the Newcastle and North Tyneside Ethics Committee (reference: NE/15/0178).

The disease burden data presented as part of this work were recorded directly from patients through the INQoL as part of their routine clinical follow-up. The INQoL encompasses a total of 45 questions covering the prevalence and impact of a set of common muscle disease symptoms [muscle weakness, muscle locking (i.e. myotonia), pain, fatigue, droopy eyelids (i.e. ptosis), double vision (i.e. diplopia), and swallowing difficulties (i.e. dysphagia)], the impact of muscle disease on daily, leisure, and work activities, patients’ independence, relationships, emotional well-being, and appearance (i.e. “looks”) [4]. In addition to descriptive analysis of the collected data, each item within the INQoL is scored on a seven-point Likert scale (ranging from 0 to 6, or 1 to 7), where a higher score represents a higher disease burden, and a total instrument score can also be calculated based on the outcomes of five subscales [4]. As part of the study procedures, we also recorded data from patients concerning their basic demographic and clinical characteristics, as well as results from the six-minute walk test (6MWT) and the Mini Mental State Examination (MMSE). The 6MWT was performed in a 25-m long corridor with input every minute following the agreed procedures at the third outcome measures in myotonic dystrophy type 1 (OMMYD-3) international workshop [3]. CTG repeat length was estimated from blood DNA by the small-pool PCR assay as described by Gomes-Pereira et al. [5] using the CTG repeat-flanking primers DM-C and DM-DR [6, 7]. Replicate reactions were separated by gel electrophoresis, Southern blotted and hybridised using a 32P-labelled 56 x CTG repeat probe. Bands were detected by autoradiography and sized by comparison against the DNA molecular weight marker, using CLIQS software (TotalLab UK Ltd.). The bottom edge of the expanded allele bands was used to determine the estimated progenitor allele length (ePAL), i.e. the number of CTG repeats inherited [7]. The densest part of the expanded allele bands was used to estimate the modal allele length at the time of DNA sampling.

We calculated the distribution of replies [i.e. the proportion and a corresponding 95% confidence interval (CI)] across all items and levels within the INQoL. We also derived the proportion of patients at or above two specific level thresholds (i.e. the first level, and the three highest levels, respectively) to facilitate interpretation and investigate the proportion of patients with, e.g. no difficulties, and a considerable amount, very many, or an extreme amount of difficulties. In addition, we calculated mean scores for each item/domain, as well as the total score as described by Vincent et al. [4], for the total sample, and by sex. We compared the distribution of replies to INQoL items and instrument scores across strata using Welch t tests and Welch’s analysis-of-variance models. In addition, we estimated Pearson’s correlation coefficients to investigate the relationship between DM1 symptoms and amount and importance of difficulties, as well as INQoL scores, and CTG repeat length, 6MWT, and MMSE, respectively. Finally, to further explore the relationship between estimated progenitor CTG repeat length and INQoL scores, we fitted ordinary least squares regression models to the study data, with INQoL scores as dependent variables and estimated progenitor CTG repeat length and age, as well as an interaction variable between estimated progenitor CTG repeat length and age, as independent variables [7]. Estimated progenitor CTG repeat length was normalised by log transformation [7]. All analyses were conducted in Stata 14 or R.

The final sample consisted of n = 60 patients with DM1 who completed all sections of the INQoL in accordance with the instructions. These patients constituted a subset of the total PhenoDM1 study population (n = 110) who were invited, and subsequently agreed, to complete the INQoL as part of the study procedures (in addition to the clinical and genetic tests performed). Summary demographic and clinical characteristics of the study cohort are presented in Table 1. Age at baseline ranged between 18 and 77 years, age at first symptoms of DM1 between 0 and 65 years, 6MWT result between 10 and 693 meters, MMSE score between 16 and 30, estimated progenitor length between 58 and 592 CTG repeats, and modal allele length between 64 and 1290 CTG repeats. At baseline, approximately 15% of patients had pacemakers, 27% history of cataract surgery, and 13% received part-time ventilation support. In our sample, women with DM1 had fewer years of full-time education (13 vs. 15, p = 0.037) and were to a greater extent in a relationship or married (70% vs. 36%, p = 0.008) compared with men. No other significant differences in reported demographic or clinical characteristics were noted by sex.
Anzeige
Table 1
Demographic and clinical characteristics of the study sample
Data presented as n (%), if not specified otherwise. Total sample: n = 60, excluding missing values for n = 2 patients (*) and n = 1 patient (**)

Prevalence, severity, and difficulties of symptoms of DM1

Impact of DM1 on daily, leisure, and work activities

Impact of DM1 on patients’ independence and relationships

Impact of DM1 on emotional well-being and appearance

Relationship between DM1 symptoms and amount and importance of difficulties

Relationship between sex and disease burden of DM1

We identified no significant differences between women and men with DM1 concerning the crude overall prevalence of symptoms (all p > 0.189), but found that a larger proportion of women with DM1 experienced a considerable amount, lot or, an extreme amount of fatigue (48% vs. 18%, p = 0.015) and depressive feelings (26% vs. 3%, p = 0.017). In addition, there was a trend that a larger proportion of women rated the importance of difficulties associated with fatigue as considerably, very, or extremely (48% vs. 24%, p = 0.059). Concerning impact on daily life, a larger proportion of men (59% vs. 30%, p = 0.025) reported that their muscle condition caused difficulties in their relationships with their friends, and more men than women rated their level of independence as quite bad, bad, or the worst it could possibly be (42% vs. 19%, p = 0.044). No other significant differences in INQoL outcomes and scores were identified in our analyses by sex.
Anzeige

We show that DM1 is associated with a substantial disease burden resulting in impairment across many different domains of patients’ lives, emphasizing the need for a holistic approach to disease management. Our results also show that the INQoL records relevant information about patients with DM1, but that further investigation of the psychometric properties of the scale is needed for meaningful interpretation of instrument scores.

The authors would like to thank all the participants and collaborators involved in PhenoDM1. Cecilia Jimenez-Moreno’s PhD studentship is funded by Consejo Nacional de Ciencia y Tecnologia (CONACYT), Mexico (ID 611819), and a university scholarship from the MRC centre for neuromuscular diseases and the Barbour Foundation.

This study has been supported by the National Institute of Health Research (NIHR) under the RD-TRC programme and by the Wyck Foundation. Dr. Hanns Lochmüller is an investigator of the Medical Research Council UK Centre for Neuromuscular Diseases (reference G1002274, grant ID 98482). The other authors report no conflicts of interest.

Study ethical approval was granted by the Newcastle and North Tyneside Ethics Committee (reference: NE/15/0178). The study was performed in accordance with the ethical standards laid down in the 1964 Declaration of Helsinki and its later amendments. All patients gave their informed consent prior to their inclusion in the study.
Open AccessThis article is distributed under the terms of the Creative Commons Attribution 4.0 International License (http://​creativecommons.​org/​licenses/​by/​4.​0/​), which permits unrestricted use, distribution, and reproduction in any medium, provided you give appropriate credit to the original author(s) and the source, provide a link to the Creative Commons license, and indicate if changes were made. 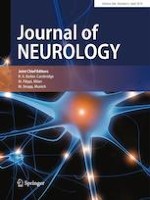 Five-year outcome in the copaxone observatory: a nationwide cohort of patients with multiple sclerosis starting treatment with glatiramer acetate in France

Bethlem myopathy: a series of 16 patients and description of seven new associated mutations