Research on employment in people with severe mental illnesses (SMI) in developing countries is sparse and largely limited to employment rates. We conducted a comprehensive study of work, interest in work, and perceived benefits and barriers to work in people with SMI in India.

Semi-structured interviews were conducted with 550 individuals with SMI receiving private psychiatric outpatient services in two districts in western India, one urban (Pune) and the other rural (Ahmednagar).

More than half of the participants were employed, with significantly more men working (79.4%) than women (35.9%). Higher rates of work were found in rural areas (77.8%), where most work was in family agricultural businesses, than in urban areas (48.9%), where most work was for independent employers. Participants in rural areas worked fewer hours and earned less money, and reported fewer benefits and fewer problems related to work than urban participants. Over 45% of participants working for independent employers found jobs with help from families and extended social networks. Most unemployed participants wanted to work, and desired a variety of supports, including assistance with job finding and illness management.

Gender-specific social role expectations and families play an important role in work in people with SMI in India. Despite higher rates of work in this sample than most studies from developed countries, a significant subgroup was unemployed but wanted to work. Persons with SMI in developing countries may benefit from the adaptation of validated vocational rehabilitation approaches in developed countries to their cultural context. 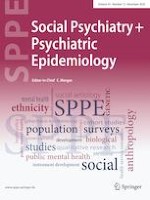 Fidelity and IPS: does quality of implementation predict vocational outcomes over time for organizations treating persons with severe mental illness in the Netherlands?

Disengagement from mental health treatment and re-offending in those with psychosis: a multi-state model of linked data

Prenatal tobacco use and the risk of mood disorders in offspring: a systematic review and meta-analysis