Anorectal fistulae resultant from Crohn’s disease (CD) is a clinical challenge. The advent of immune therapy (IT) has altered the way in which fistulae have responded to treatment. Endorectal advancement flap (ERAF) is a surgical procedure that is used to treat complex fistulae. We have employed ERAF as our second stage treatment of choice in this patient population. Our aim was to determine the success of ERAF in treating perianal fistulas in patients with CD in an era of IT.

Multicenter retrospective review from 2007 to 2017 of all patients with CD and a perianal fistulae who underwent ERAF.

Forty-one flaps were performed in 39 patients with perianal CD with an average follow-up of 797 days. There were no significant differences in patient demographics; however, all patients who were diverted at the time of surgery had successful healing. Of patients, 73.2% were on IT at an average of 380 days prior to surgery. The duration of single-agent therapy was associated with better healing rates (p = 0.03). The overall failure rate was 19.5% (n = 8). Six patients underwent secondary techniques for fistulae closure; five were successful. In combination with the patients who did not initially fail, the overall healing rate was 92.6%. 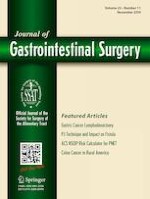 Survival after Resection of Multiple Tumor Foci of Intrahepatic Cholangiocarcinoma

Laparoscopic Repeat Hepatic Resection for the Management of Liver Tumors