The online version of this article (https://​doi.​org/​10.​1007/​s10620-018-5155-8) contains supplementary material, which is available to authorized users.
Aymeric Becq and Saik Urien have contributed equally as first authors.

In this prospective, observational, cohort study conducted in a French teaching hospital, 40 consecutive ICU patients receiving epinephrine infusion in whom a stress ulcer was diagnosed by an upper gastrointestinal endoscopy were included, from February 2010 to July 2015. The effects of epinephrine dose, and other covariates, on the occurrence of stress ulcer-related CSGB were analyzed using a multiple logistic regression model for repeated measures: At each observation, each patient serves as his own control.

An increase in the average dose of epinephrine per day increased the time to occurrence of stress ulcer in critically ill patients. 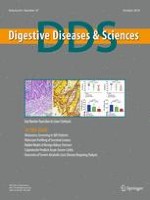 Correction to: Inflammatory Bowel Diseases Can Adversely Impact Domains of Sexual Function Such as Satisfaction with Sex Life